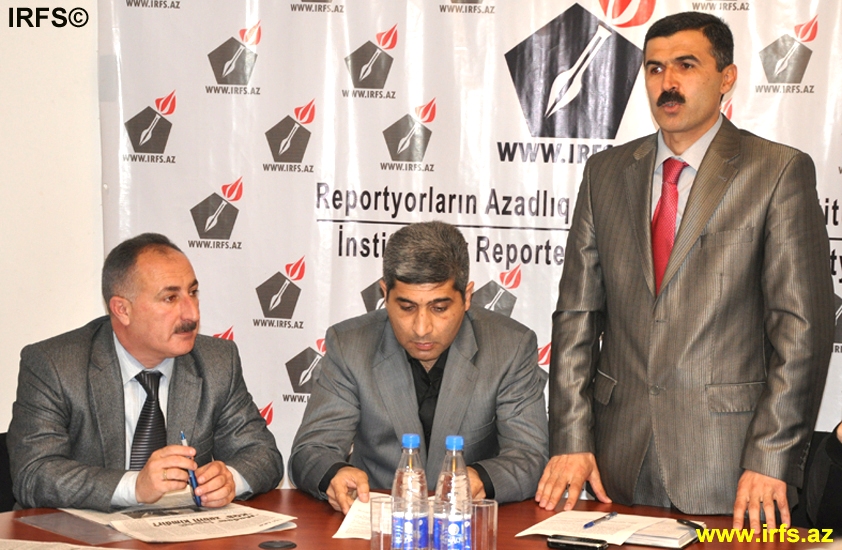 Today, 6 April, in the press centre of the Institute for Reporters’ Freedom and Safety (IRFS) the Press Defense Committee created by the Journalist Expert Centre and the Society for Democratic Reforms held a roundtable regarding the lawsuit of the National Union Movement Head Lale Shovket Hajiyeva against Olke newspaper.
Journalist Expert Centre Head Jeyhun Musaoglu said that the lawsuits and demands for huge amounts harm the operation of the newspapers. He noted that the Press Defense Committee will prepare proposals regarding this to present to Milli Mejlis and international organizations.
Society for Democratic Reforms Coordinator Ogtay Gulaliyev said that L.Hajiyeva’s lawsuit against Olke newspaper is not understandable. He condemned the action of L.Shovket, who should be defending the freedom of speech and justice. Gulaliyev stressed that all journalists and NGOs have to fight against this problem.
Olke newspaper’s editor-in-chief Rafael Bejanov said that Lale Shovket was not presented as an “agent” in the article in question, and there was only one comment regarding her reaction to the opinions of Musavat Party leader Isa Gambar, “There are people who work for the foreign intelligence in Azerbaijani opposition.” However, R.Bejanov said that they are ready to conduct discussions with Lale Shovket and to apologize, provided that she proves that libel was committed against her.
Journalist Idrak Abbasov said that it is normal for everyone to appeal to court, but condemned the demand for a big amount from the journalist.
Nijat Daglar, one of the authors of the article in question said that there was not insult and defamation in the article and therefore he is not going to apologize.
Turan Information Agency Director Mehman Aliyev said that it is possible to understand that the agent with nickname “Madam” in the article is Lale Shovket. He suggested that a working group should be created and this problem should be solved through discussing with Lale Shovket.
A decision was adopted to create a working group.
On 11-17 February Olke newspaper published an article entitled “Who is the agent with the nickname ‘Madam.’” L.Shovket claimed that information about her not conforming to reality found its place in the article, and therefore, demanded that a refutation be published in the newspaper, and that they apologize and each pay 100 000 AZN in fines.
Previous Post