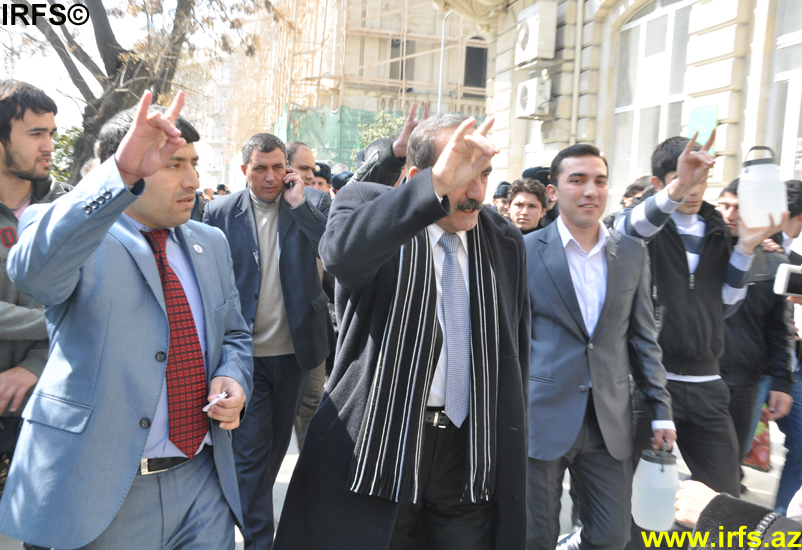 Today, 2 April, the World Azerbaijanis Congress held a protest action in front of Iranian Embassy in Azerbaijan regarding Urmiya Lake in Iran, which is in danger of drying out.
The protesters, who held placards in their hands showing the picture of Urmiya Lake and WAC emblem, were prevented by police from entering the embassy building. After the placards were confiscated by the police, two WAC representatives were given permission to submit the statement to the embassy. However, an embassy employee, who introduced himself as Khani, took the written statement, crumpled it up and insulted the action participants.
“These people are trying to deteriorate relations between Iran and Azerbaijan,” he said, and refused to accept the statement. Then the police distanced WAC representatives from the building.
WAC representative Ajdar Tagizade told the journalists that their intention was to express civil objection against the issue. “Now a lot of people bring water in water containers to pour into the lake as a sign of their objection,” said A.Tagizade. “Therefore we wanted to leave the water in the containers in front of the embassy. WAC demands that Iran takes all the necessary measures to prevent the Urmiya Lake from drying out. We believe our action was realized.”

LAWSUIT OF GUNDALIK BAKI NEWSPAPER AGAINST PRESS COUNCIL NOT FULFILLED

ROUNDTABLE HELD: “INDEPENDENCE OF JUDGES IS THE BASIS OF LEGAL GOVERNMENT