ROUNDTABLE HELD: “INDEPENDENCE OF JUDGES IS THE BASIS OF LEGAL GOVERNMENT 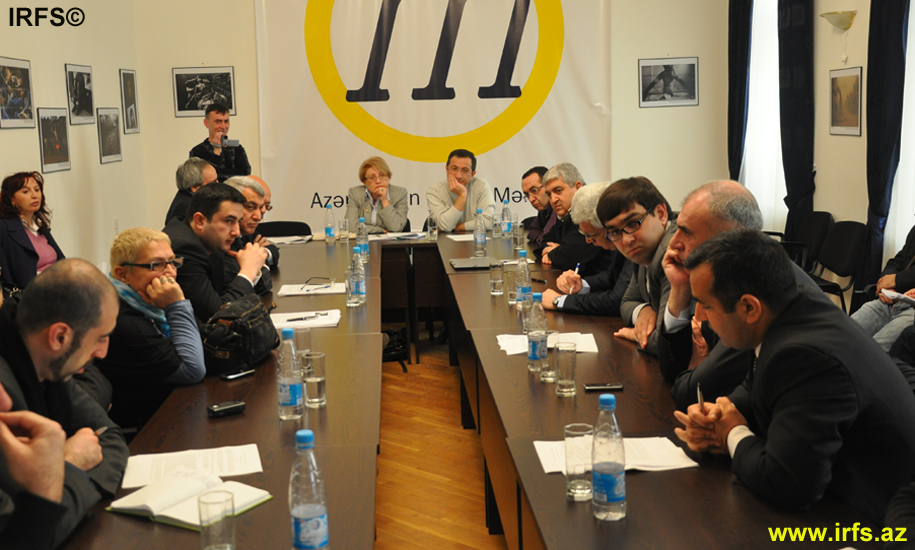 Today, 2 April, in the Azerbaijan Media Center, Peace and Democracy Institute Head Leyla Yunus conducted a roundtable on the theme “Independence of Judges is the basis of a legal government.”
L.Yunus stated that Supreme Court Chairperson Ramiz Rzayev said that courts and judges are not independent. L.Yunus said that the court system in Azerbaijan is in a dire situation, and mentioned that it is crucial to make changes to Laws “On Courts and Judges” and “On Court Law Council.”
Former prosecutor Yusif Agayev spoke and said that there are gaps in court legislation, and therefore judges are not independent. He stated that changes to the Constitution and other legislative acts are inevitable to reorganize the Court Law Council. Agayev noted that judges’ authorities should be prolonged up to their retirement age, and executive administration organs should not have power to punish or dismiss judges.
Other lawyers spoke about gaps in the court system of Azerbaijan and mentioned that judges issue decisions according to orders; the Court Law Council is a formal organ and the Lawyers Board interfere with normal work of objective lawyers. They noted that discussions should be held and the legislation should be improved.
Azerbaijan Lawyers Confederation Secretary Nadir Adilov did not agree to these opinions and claimed that courts are all independent.
Sabail District Court representative Aykhan Rustamzade said that he disagreed with the negative opinions about courts and judges. He said he highly valued the work of the Court Law Council.

JOURNALISTS’ LAWSUIT AGAINST POLICE NOT FULFILLED