ROUNDTABLE CONDUCTED REGARDING CHANGES TO LEGISLATION ON MEDIA AND NGOS 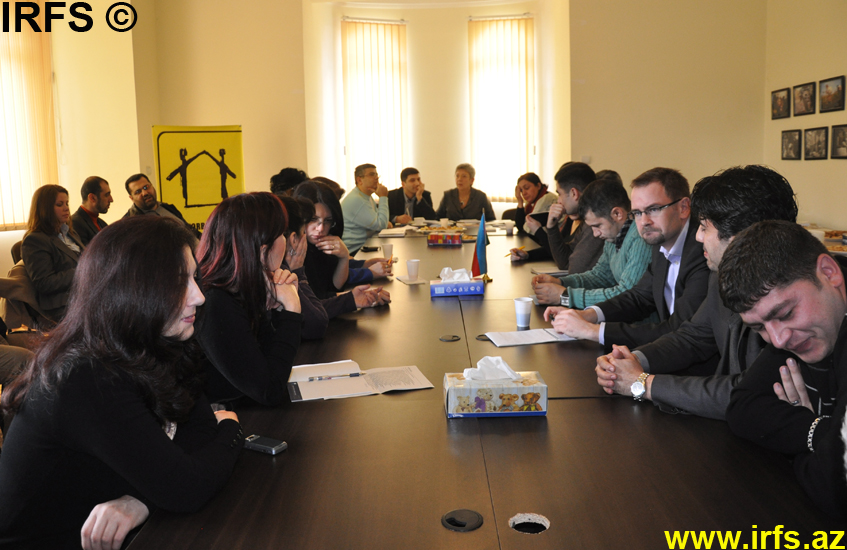 Today, 23 February, in the Human Rights House, a roundtable was conducted regarding the amendments and changes to the laws “On NGOs”, and “On Mass Media.”
Norwegian Human Rights House Representative Ane Tusvik Bonde said that they discussed the situation of NGOs and Mass Media in Azerbaijan during a meeting they held at PACE.
Poland Helsinki Assembly Head Danura Presivara stated that it is important to fight against the changes and amendments made to aforementioned laws. Another representative of the Assembly Lenur Karimov suggested that monitoring of NGOs should be conducted and their problems should be specified.
Representative of OSCE Office in Baku Jacqueline Carpenter recalled that Azerbaijan made commitments when it was accepted to OSCE, and the amendments and changes made to Law On Mass Media violate these commitments. The representative stated that these changes will restrict journalists’ access to information.
Media Rights Institute Head Rashid Hajili said that the law on NGOs lacks regulations, and therefore, problems are inevitable during the registration of grants. Hajili noted that this way the government wants to control the grants.
Law Education Society Head Intigam Aliyev emphasized that independent NGOs are in a difficult situation and international organizations cannot do anything in this sphere.
Institute for Reporters’ Freedom and Safety Chairman Emin Huseynov touched upon the issues of NGO registrations and stated that local courts do not follow the precedents of the European Court of Human Rights regarding this issue.
Along with the organizations included in the South Caucasus Network of Human Rights Defenders, representatives of NGOs operating in the regions participated in the event.
On 25 December 2009, President Ilham Aliyev signed a decree regarding restrictive amendments and changes made to several decrees concerning the application of Law # 842-IIIQD (30 June 2009) On “Changes and Amendments to Several Legislative Acts of Azerbaijan Republic.”
On 12 February, the following changes were adopted to the law “On freedom of Press,” “On Mass Media”, and “On obtaining information” in the meeting of Milli Majlis:
“Excluding operational-investigation cases, following someone, and subjecting them to video, photo or voice recording by media representatives and other persons without them knowing it or with them objecting to it is punishable as defined by law.”