ROUNDTABLE HELD IN CONNECTION WITH SITUATION OF FREEDOM OF SPEECH 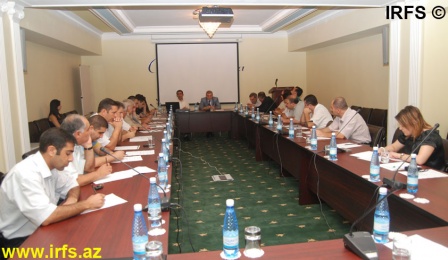 Today (9 September) a roundtable – “The Situation of Press and Freedom of Speech in Azerbaijan” – was conducted by “Inam” Pluralism Center. Vahid Gazi, the director of the center, stated that the roundtable was carried out within the framework of discussions related to Euro-Integration.

A speech prepared by the Media Rights Institute (MRI) representative Khalid Agaliyev, was presented during the event. The application of European standards in the area of speech and press freedom in Azerbaijan, achievements in this area and issues related to current problems were reflected in the speech. The weakening of the print media because of the application of censorship, the rise of pressure against mass media, supervision on state TV channels, and fines levied against the media were given special emphasis.

“Zerkalo” Newspaper commenter Rauf Mirgadirov expressed his opinion about the abolition of political censorship in 1998, which was reflected in the speech. He said that censorship was abolished by the constitution approved in 1995, but censorship was applied unlawfully until 1998. According to him, the free press can’t exist in a country where the economy is not free. Mirgadirov noted that there are serious problems in the area of freedom of speech and the general system should be changed to solve these problems.

Parliamentarian, “Adalat” Newspaper editor-in-chief Agil Abbas said that he doesn’t agree with the demands of European Organizations regarding the elimination of responsibility for defamation. A. Abbas added that journalists that insult should get harsher punishment than fines.

TMedia Rights Institute director Rashid Hajili and European Union Azerbaijani office representative Ilgar Ibrahimoglu emphasized that the journalists who are currently imprisoned were not arrested for libel, but for concrete critical articles.

Institute for Reporters’ Freedom and Safety Chairman Emin Huseynov touched on the issue about the defense of journalists and said that this job is getting harder. “Yesterday was International Journalist’s Solidarity Day and it once again showed that our ranks are growing thinner. In addition, there are dates like National press Day, International Freedom of Speech Day, but even on those days, journalists don’t get together. In such a situation, the defense of journalists becomes harder,” said Huseynov.

EYNULLA FATULLAYEV NOT GIVEN OPPOSITION AND INDEPENDENT NEWSPAPERS