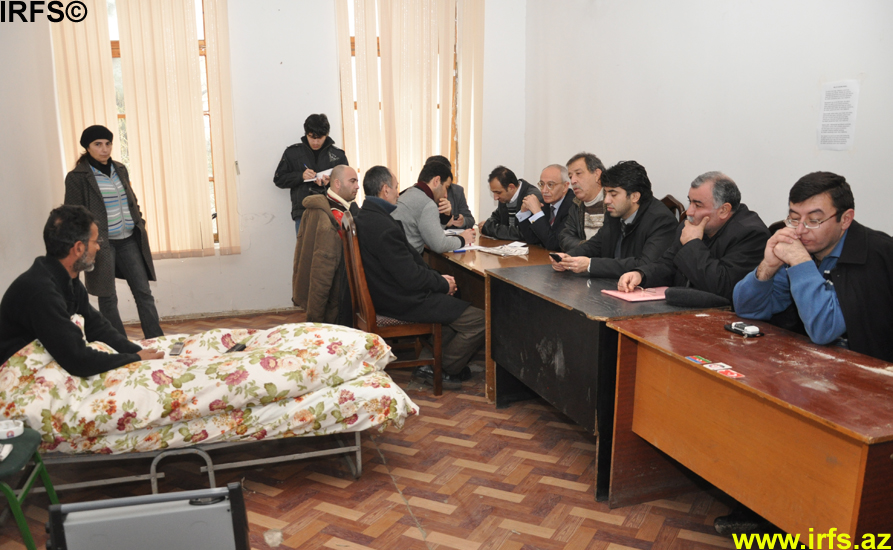 On 19 January, a roundtable was held on the theme of “The Free speech problem of independent media,” by Khural newspaper at the Headquarters of the Azerbaijan Democratic Party (ADP), in the room where satiric/journalist Sakit Zahidov was holding a hunger-strike.
Khural Newspaper Editor-in-chief Avaz Zeynalli opened the event, and said that not only Sakit Zahidov’s hunger-strike, but also self-censorship problems in the media should be touched upon in the event.
Satiric/journalist Sakit Zahidov said that similar problems arose in Azadlig newspaper previously and restrictions were imposed on his poems. He added that he was distanced from the newspaper for four months after he was released from prison. Sakit emphasized that this was done under pretexts that imprisoned Editor-in-chief Ganimat Zahid could be harmed or his own safety would be in danger and the newspaper would be shut down. He added that his article was published only after he met with imprisoned Editor-in-chief Ganimat Zahid and talked to him about internal issues in the newspaper.
Writer Rafig Tagi noted that he read Sakit’s poem, and will publish it in his newspaper. “Democracy is very fragile and could be devastated easily by dictators; therefore dictatorship is being fought against even in the most democratic countries,” said Tagi and added regretfully that there are certain restrictions for writing against dictatorship within a press that is considered democratic. He compared today’s press of Azerbaijan with the Kirpi journal published during soviet era. “In Kirpi journalists were allowed to criticize government officials – but within a framework,” said Tagi. “We shouldn’t bring Azadlig and Yeni Musavat to the level of Kirpi.”
Writer Murad Kohnegala expressed his opinion concerning Ganimat Zahid’s message from prison to Sakit Zahidov and added that Ganimat has in fact no responsibility in the newspaper. “Several times I had a problem publishing my articles in Azadlig newspaper; however, it was solved within the editorial office and imprisoned G.Zahid had no information about it,” said Kohnegala. “I believe that all these incidents are aimed at putting two brothers- Ganimat Zahid and Sakit Zahidov- against each other.”
Institute for Reporters’ Freedom and Safety (IRFS) Chairman Emin Huseynov said that it is necessary to hold this kind of a meeting. Emin Huseynov stated that it is sad that internal censorship has emerged in the media recently. He noted that Sakit Zahidov is the only writer that continued these kind of articles while he was imprisoned. Emin Huseynov emphasized that imprisoned journalists should keep writing in the press. “If they are not allowed to send their articles out of prison, articles should be published under the names of imprisoned journalists via their messages through their relatives. This will preserve the imprisoned journalists their images as writers.” The IRFS Chairman suggested that Sakit Zahidov stop his hunger-strike.
Writer Elnur Astanbeyli said that he never faced restrictions to publish his articles in Azadlig newspaper. He therefore assessed this incident between Azadlig newspaper and Sakit as “an effort to put two brothers face to face.”
Azadlig newspaper journalist Gan Turali spoke and said that there is insult in Sakit’s poem. “As a person understanding literature, I want to say that there is an insult in that poem,” said Gan Turali.
The participants of the roundtable reminded Zahidov of the 20 year anniversary of 20 January incidents and asked him to stop the hunger-strike. As a result, he stopped the hunger strike he had begun on 16 January.
On 16 January, Sakit Zahidov began a hunger-strike because the poem he presented on 11 January was not published in Azadlig newspaper. Azadlig newspaper chief director Azer Ahmedov said that there were insulting expressions in the poem and that is why it was not published in the newspaper. Sakit noted that the dictator regime was criticized sharply in the poem, but there were no insulting expressions in it.

STUDENT JOURNALIST CAN BE DISMISSED FROM UNIVERSITY