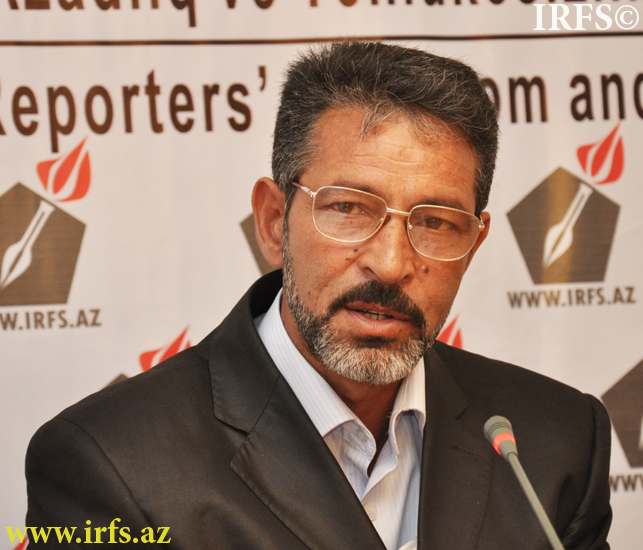 Today, April 17, in the press center of the Institute for Reporters’ Freedom and Safety, “Azadliq” Newspaper journalist/satiric Sakit Zahidov, also know by his penname Mirza Sakit, conducted a press conference.
Opening the press conference, S. Zahidov thanked local and international organizations, the OSCE, U.S. State Department, human rights defenders and several people in the government for the support they showed him during his nearly three years in prison.
Speaking about his time in prison, Zahidov called this period terrible, but said, “Despite all of these hardships, I will continue to write. Besides being an employee of ‘Azadliq’ Newspaper, I am also a poet. The greatest person of the 21st century Elmar Huseynov continued his mission until his death. But the people who killed him have not received any punishment yet. Despite this, I will not stray from this path.”
Sakit Zahidov spoke about law violations he observed while in prison. He said that he was aware of a number of law violations in Prison #14. According to Zahidov, during the referendum not a single prisoner was provided with a ballot paper. “The people behind this are Major Ali Ibrahimov and his assistant, Major Vusal Mahmudov, both who work at Prison #14. I appealed to Central Election Commission Chairman Mezahir Penahov about this writing. However, there was no reaction from him. After this, I managed to leak this information to the press through secret means and this information was published in 22 March 2009 edition of “Azadliq” Newspaper.
Zahidov expressed his opinion about the other imprisoned journalists – Ganimat Zahid, Eynulla Fatullayev and Mushfig Huseynov. “Their imprisonment and the situation they are in is the government’s fault. Therefore the press must and does write frequently about them and support them.”
According to S. Zahidov, people were subjected to torture in Prison #14. “They even handcuffed me illegally once there,” said Zahidov. “They did this because of the poem I wrote called “Ilhamla Ireli (Forward with Ilham). I witnessed physical torture there. To break the will of prisoners they had them drag a 50-60 kg. plow. One time they wanted to bring me into this, but I protested and caused a ruckus. I appealed to Elchin Behbudov (Chairman of Azerbaijan’s Committee Against Torture) about this. After he came to the prison, this problem was eliminated.”
Sakit Zahidov talked about law violations and bribery at Prison #14 and said that bribes are even taken when people meet. He said he witnessed first hand the tyranny in Prison #14.  According to S. Zahidov, one citizen of Turkey named Hamid Doghan was handcuffed and subjected to torture under the direction of the prison chief, after Doghan informed the prison chief about conflicts between prisoners. “I told human rights defender Chingiz Genizadeh about this and asked him to get involved, but he did not react to this. Therefore, I myself am obligated to recall this incident here.