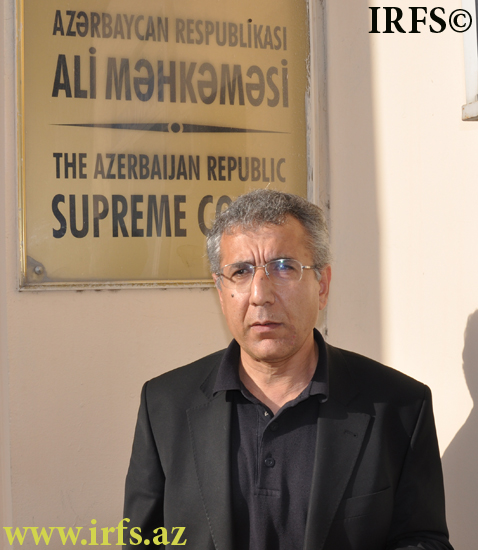 Today, April 17, the Supreme Court’s Plenum reviewed that lawsuit of Azerbaijan Republic’s Lawyers Collegium’s lawsuit against “Legal Education Society” founder, “Huquq” Newspaper Chief Editor Intigam Aliyev to confiscate property and freeze I. Aliyev’s assets.
I. Aliyev told the Institute for Reporters’ Freedom and Safety that at the end of the plenum the Lawyers Collegium’ lawsuit was accepted for review. “The Supreme Court issued a decision that the Lawyers’ Collegium’s extra cassation complaint be fulfilled and the case be sent to the Supreme Court to be reviewed again. I. Aliyev also said that the Supreme Court Chairman illegally put this case up for discussion in the plenum.
OSCE Baku office employees Alovset Aliyev and Muzaffar Bakhishov, “Azerbaijan Lawyers Association” President Annagi Hajibeyli, a representative from the Norway Embassy in Azerbaijan and IRFS employees were not permitted to observe the plenum. They were told that people must get permission in advance to observe the plenum.
The Lawyers Collegium is demanding the institution of a 200,000 AZN fine against “Legal Education Society” Founder, “Huquq” Newspaper Chief Editor Intigam Aliyev and the confiscation of Aliyev’s property, because Aliyev filed a lawsuit against the collegium and wrote critical articles about it. After changes were made on 3 June 2005 to the law on “Lawyers and Lawyers Activities” and membership in the collegium started to be granted to tests given by licensed legal specialists, he began to attempt to formalize his membership in the collegium. However, the Lawyers Collegium Presidium refused to recognize this rights of I. Aliyev in a meeting held on 19 November 2005. As a result, Aliyev filed a lawsuit against the collegium in December of 2005. According to a 19 December 2005 decision of the court, the lawsuit was returned back stating because the court was not supposed to consider such cases. On 23 August 2008, I. Aliyev appealed to Court Rights Board and other authorized organs stating that not considering his case was illegal.  After this appeal, a hearing was held in the Nasimi District Court on Aliyev’s case and a trial on this matter was scheduled to take place on 6 November 2008. However, the hearing was not held. On 9 March 2007, the collegium filed a lawsuit against I. Aliyev accusing him of publishing unfounded information about the collegium. In the lawsuit, the collegium has demanded that Aliyev’s property be confiscated and his bank account be frozen.

PRESIDENT SIGNS DECREE ON CHANGES TO LAW “ON MASS MEDIA”