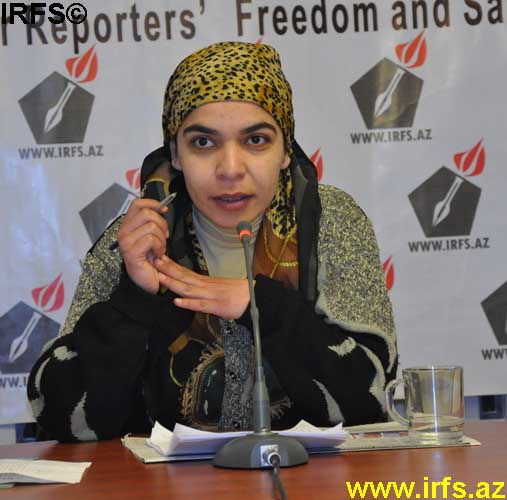 Today, April 24, at noon, in the press center of the Institute for Reporters’ Freedom and Safety, Citizen Seyyare Heydarova conducted a press conference regarding the decision of the Surakhani District Court issued on her case.
During the event S.Heydarova said that the decision of court is unjust, and was issued at an order and demanded that the decision be annulled.
“I – the accused person – was not present at the court when the verdict was announced and issuing a decision without my participation is against law,” stated Heydarova, adding that she wants to be vindicated.
Announcing that she has stopped hunger strike today she began seventeen days ago, S.Heydarova said she was force fed in the intensive care unit of a hospital because her life was in danger.
During the conference, Heydarova said that the building built on the site, which was the cause of the conflict, is not a storehouse as is indicated in the order given by the Baku city Executive Administration, but belongs to a high-ranking official of the Presidential Administration. Heydarova did not reveal the name of the official, but said that the court held a biased position towards her at the order of that official.
At the end of her speech S.Heydarova asked the journalists to assist her to collect the amount of money needed for her to retain a lawyer capable of having her guilty verdict overturned.
The the Surakhani District Court found S.Heydarova guilty in hooliganism and sentenced her to three years of conditional imprisonment.

LAWSUIT AGAINST JOURNALISTS NOT TO BE CONSIDERED