SITUATION OF MEDIA IN AZERBAIJAN DISCUSSED IN INTERNATIONAL CONFERENCE 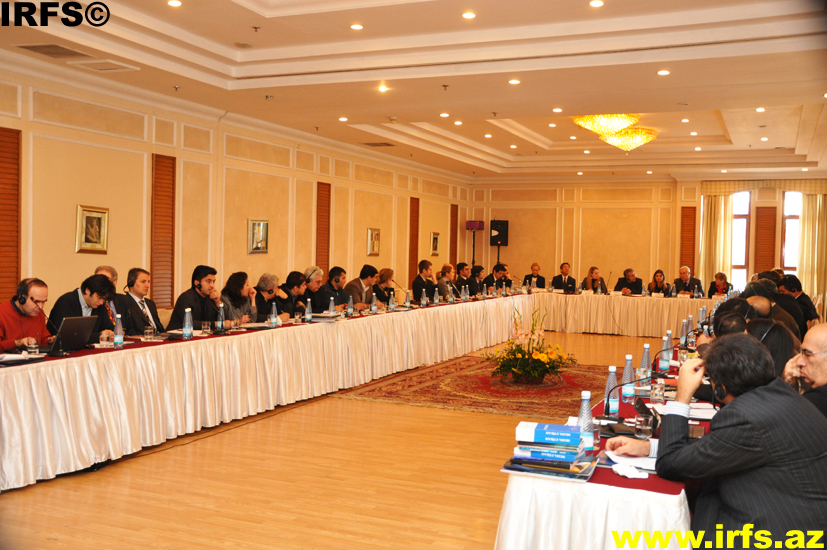 Today, 11 December, in a two day International Conference that was held within the World Democracy Movement on the theme of “The Development of relations between Government and Civil Society,” a discussion was conducted on media.
Media Rights Institute (MRI) Head R.Hajili said that nine journalists were arrested over defamation charges during the year and two of them are still imprisoned.

According to R.Hajili, physical pressure was exerted against 350 journalists in Azerbaijan during the last five years. Only three of these pressure cases were investigated and some results were achieved. Several cases were not investigated at all. During the last several years the development of legislation not only stopped, but it was also subject to regression. He gave information regarding several negative changes made to the legislation in the media sector in 2008. R.Hajili said everyone should support the legislation initiatives regarding the defense of the journalists and media.

Institute for Reporters` Freedom and Safety Chairman Emin Huseynov said that the Press Council was officially made the Executive Administration after the changes were made to media, and the Council was given right to file a lawsuit to cease the work of newspapers. However, this is nonsense and absurd.

According to Huseynov, although AZTV allocated free air time during pre-elections in 2005, this was prevented during following elections.

Huseynov said that no television channel has appealed to the Central Election Commission (CEC) for pre-election campaign except ITV before the municipal elections that will be held this year, and added that this process is operated by the same center. Huseynov said that although it is easy to create an organization as a legal person, he assessed the failure of the National Television and Radio Council (NTRC) to announce tenders, contests, and reveal the list of frequencies as negative trends.

Huseynov added that there is not a single regional FM radio in Azerbaijan, and rejection of the appeals to open a regional radio in Sumgait was rejected.

“There is no real economic condition in Azerbaijan to open normal Media; in 1998 the government secretly announced a government policy to destroy economic basis of the media. The main purpose here is to increase the dependence of the Media on the government,” said “Turan” Information Agency Director Mehman Aliyev.

According to Aliyev, pressure began against companies advertising media, the price of paper was raised, lawsuits were filed against the newspapers that were weakened economically but operating independently, and physical pressure against the journalists working at these newspapers increased.

M.Aliyev added that the cases over defamation charges against journalists decreased because they are not as active as in the past and do not do as much research.

According to M.Aliyev the Azerbaijani people are under the influence of foreign, but not local press ;and therefore R.Mehdiyev’s article was published and wide discussions took place around it. Aliyev noted that it is important that the media should be economically free, and then the media will be free in every sphere.

Representative of IREX Azerbaijan Alasger Mammadli assessed the authority given to several law enforcement organs and the Press Council in 2008 to close media outlets as a step backward.

A.Mammadli said that the Assistance Foundation to Press is formal in character and assessed it as a step to strengthen the dependence of the newspapers.

Democracy and Human Rights Resource Center Chairman Asabali Mustafayev offered to create an organization to have a platform and working groups within this organization on various directions.