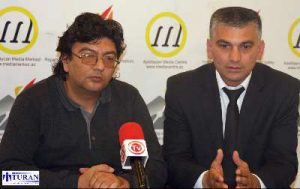 On October 31 the founder of newspaper Gundam Khabar, Shirin Jafari and several other employees of the paper held a protest against the paper’s sale in Baku Metro, by handing out free copies of the paper to people. The protest took place in front of the “Elmlar Akademiyasi” metro station entrance/exit.

The group then approached to the office of Tagi Ahmadov, head of the Baku Metro, and requested a meeting. They were denied a meeting, though asked to present a written complaint.

According to Jafari, he submitted numerous written complaints to Tagi Ahmadov, but none of them were responded to. The newspaper founder believes the ban is politically motivated, as in its articles Gundam Khabar criticizes corruption.

Notice that according to recent reports, the authorities have banned the sale of Azadliq, Yeni Musavat and Gundam Khabar newspapers in Baku underground.

Invitation to the roundtable: Azerbaijan’s implementation of international commitments