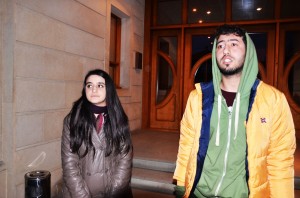 The Institute for Reporters’ Freedom and Safety (IRFS) resolutely condemns the harassment and unlawful detention of civil society organizations (CSO) representatives in the Khachmaz, a Northern city of Azerbaijan and calls on the government to  put an end to a carefully coordinated witch hunt against civil society and immediately take the concrete steps to improve legal and regulatory frameworks to safeguard CSO enabling environments, sustainability and independent CSO public interest agenda roles.

IRFS is dismayed that ahead of presidential elections the government has engaged in a campaign to silence and discredit journalists, activists and nongovernmental organizations.

In an escalation of the government crackdown on civil society, early on February 12th, the local authorities in Khachmaz harassed and detained IRFS Program Manager and lawyer Gunay Ismayilova and EMDS staff Javid Nabiyev.

The two civil society activists were on mission to Khachmaz to run workshop on citizen participation in public policy as part of a larger initiative, funded by the European Union and USAID. The skills-building workshop was abruptly closed after local police raided the venue just before the workshop started. The workshop, organized by Election Monitoring and Democracy Studies Center, brought together approximately 12 local activists.

The plain clothed  broke up an EMDS workshop in Sahil hotel in Khachmaz and rounded up all the participants, seized workshop participants and trainers’ documents and personal belongings and then simply kicked off them from the venue despite of the fact that the course was held upon prior agreement with the management of the a/m hotel.

The trainers rushed to the Khachmaz Local Community Information Center to escape the harassment, where they encountered even more aggressive pressure from the police. During police raid, trainer Javid Nabiyev was brutally beaten by police officers. The trainers were eventually arrested and detained at the police office till late in the evening, i.e. for eight hours.

The trainers were eventually released pending further investigation. Ismayilova, female lawyer, 25, says: “For all these eight hours of physiological pressure, I was tortured being kept hungry and thirsty, under stress and fear of losing my freedom” says Gunay Ismayilova.

Yesterday raid on civil society workshop by Khachmaz police was arbitrary, and an illegitimate infringement on freedom of association and assembly, says IRFS Chair Emin Huseynov.

Ismayilova and Nabiyev appear to be the latest targets of the authorities’ use of seemingly trumped-up criminal charges to intimidate Azerbaijan’s human rights defenders and social activists. “Many other human rights workers and journalists have been harassed, intimidated and arbitrarily detained  as part of the ongoing crackdown on freedom of expression in the country ahead of the elections. . These cases cast doubt on whether the country is ready to hold a fair elections”, said Huseynov.

This move follows a widening crackdown on the civil society such as introduction of a new bill tightening the control on the activities of NGOs and refusal of hotels and conference centers to refuse space for NGOs.

IRFS states that this action is an illegal restriction on citizens’ right to freedom of association and assembly, which is contrary to Azerbaijan’s obligations undertaken before the Council of Europe, OSCE and the United Nations.

IRFS calls on the Azerbaijani government to put an end to the vicious circle of harassment and arrest of civil society representatives and immediately embark on the concrete reform to improve legal and regulatory frameworks to safeguard CSO enabling environments, sustainability and independent CSO public interest agenda roles.

IRFS urges the local and international community to take immediate action to prevent Ismayilova and Nabiyev from being unjustly incriminated with charges under Article 315 of the Criminal Code/Resistance or application of violence concerning the representative of authority.