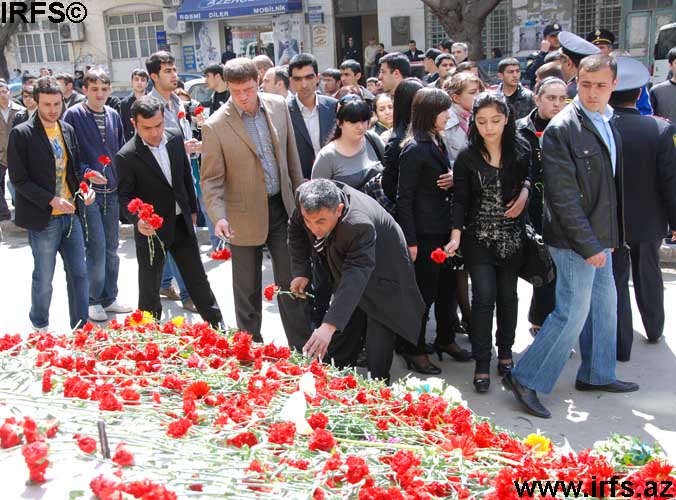 A commemoration has been held to the memory of the people murdered during the bloody incident at the State Oil Academy of Azerbaijan (SOAA) yesterday. The students, teachers and citizens gathered in front of SOAA laid wreaths and carnations at the building where the incident happened. Thousands of people participated in the action which began at morning hours. At around noon police confronted a group of students that were holding Azerbaijan’s flags and slogans “No to Terror” and chanting slogans against terror in front of the main building of SOAA.
After the flags and slogans were taken away from the students that came from different universities, they were allowed to join the event without chanting slogans.
The protest, where more than a thousand students took part, began at 1:30 p.m. in “Azadlig” square as march. The police tried to prevent the march accompanied by “No to Terror”, “Students don’t die and Country indivisible”, “Let the Flags Descend, Declare Mourning” slogans; however, after a brief negotiation, Baku city Head Police Department Deputy Chief Yashar Aliyev gave permission for the march to continue up to Jafar Jabbarli monument. The march participants assembled in front of J.Jabbarli monument and demanded that three day mourning be announced in the country. Then the action ended without any incident.
Yesterday, at morning hours, as a result of an attack at the education building #2 of the State Oil Academy of Azerbaijan by an armed person, 13 people died and 13 people were injured.