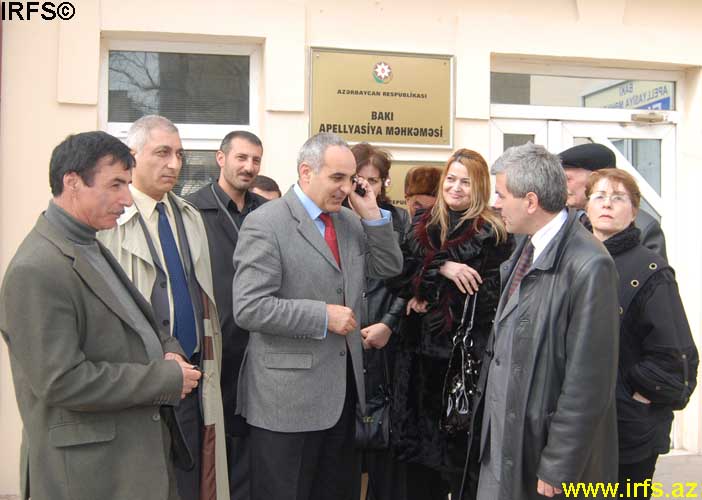 Today, 9 April, in the Baku Appellate Court, under the chairmanship of Judge Gail Mammadov, a hearing was held on the appeal of “Tezadlar” Newspaper’s Chief Editor Asif Marzili against the decision of the Yasamal District Court.  Judge Gail Mammadov adopted a decision to annul the decision issued by the Yasamal District Court Judge Tahir Ismayilov on 7 April 2009 against “Tezadlar” Newspaper’s Chief Editor Asif Marzili, to free him, and to return the case back to the first instance court to be reconsidered. The judge also annulled the decision of the Yasamal District Court to sentence freelance journalist Zumrud Mammadova to six month corrective labor.
Appellate Court Judge G. Mammadov also issued a special decision to give Judge Abbas Rzayev, who considered the case against A. Marzili, a harsh reprimand and to give Judge Tahir Ismayilov, who issued an arrest decision about Marzili, a reprimand. The Institute for Reporters’ Freedom and Safety was told this by A.Marzili’s defense lawyer Elchin Sadigov, “Media Rights Institute”.  According to Sadigov, this special decision will be sent to the Court Law Council to be considered and the Council will evaluate it.
Recall that on April 7, on the basis of a lawsuit of Azerbaijan International University (AIU) Director Elshad Abdullayev "Tezadlar" Newspaper Chief Editor Asif Merzili was sentenced to one year of imprisonment by the Yasamal District Court for defamation.
This lawsuit stems from the article entitled “Is Mahir Abdullayev in Baku?” published in the 19-26 2008 edition of the newspaper and a series of articles related to this topic. In the lawsuit, E. Abdullayev sought the closure of “Tezadlar” Newspaper, the arrest of both journalists and the institution of a 30,000 AZN fine against both journalists for moral damages.