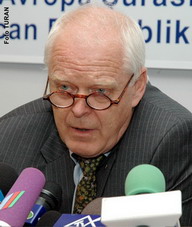 Today, 29 June, the Council of Europe Commissioner for Human Rights, Thomas Hammarberg, unveiled his report on Azerbaijan. Following his visit carried out on March 1 to 5, the report focuses on freedom of expression and association, conduct of law enforcement officials, administration of justice, and contains some observations on the visit to the Autonomous Republic of Nakhchivan.

“Freedom of expression is curtailed in Azerbaijan today – major improvements are needed” said the Council of Europe Commissioner for Human Rights, Thomas Hammarberg, today presenting his report on the country.

Hammerberg drew attention to the cases of threat, harassment, and violence against journalists or human rights activists which have not been properly investigated. “The authorities must better protect, from any sort of violence to journalists and others who may express critical opinions. The perpetrators of such acts should be adequately punished.”

Thomas Hammerberg noted that “anyone imprisoned because of views or opinions expressed, including Eynulla Fatullayev, Emin (Mili) Abdullayev and Adnan Hajizadeh, should be released immediately”. In addition, the Commissioner underlined that decriminalization of defamation is needed to bring the legislation in conformity with European standards and recommended that the authorities allow BBC, Radio Liberty/Radio Free Europe, Voice of America and Europa Plus radio stations to resume broadcasting on FM waves.

The Commissioner acknowledges the willingness of the authorities to take steps to facilitate the registration of NGOs, but is concerned about recent legislative changes which could limit the freedom of association. “Authorities should refrain from controlling activities of NGOs in an unduly strict manner. Requirements and procedures for registration, including re-registration of religious communities, must be simple in order not to deter associations from registering.”

Regarding the issue of misconduct by law enforcement officials, the Commissioner calls for an independent and effective investigation of all allegations of torture and ill-treatment with the imposition of appropriate sanctions. Commissioner Hammarberg is also concerned about the non-enforcement of domestic violence court judgments.

With regards to the situation in the Autonomous Republic of Nakhchivan, the Commissioner emphasizes that involuntary placement in psychiatric institutions should be allowed only by court decisions issued on the basis of a medical assessment.

To view the full report: