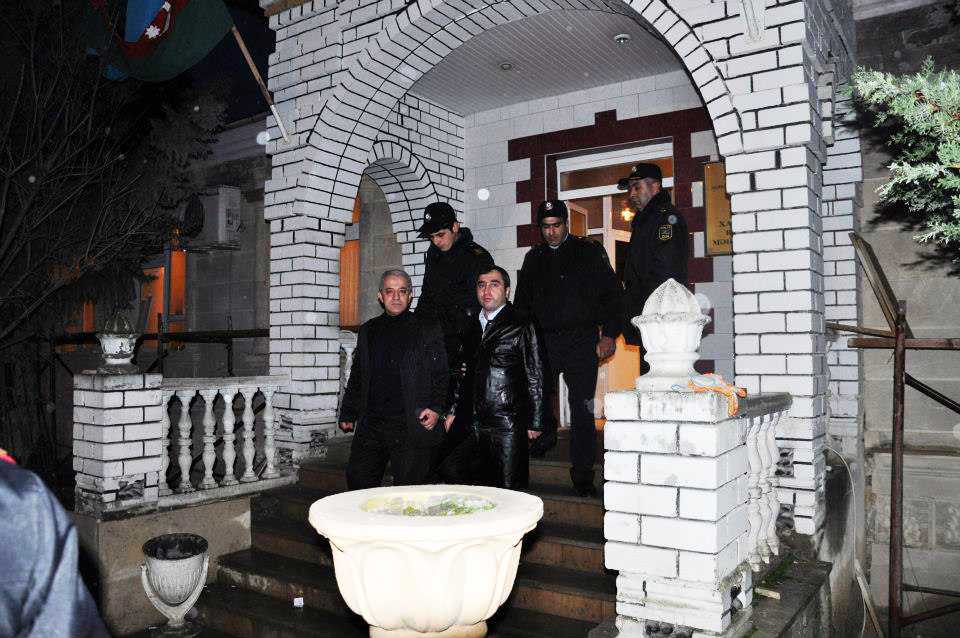 On January 8, 9 ,10 and 14 Khachmaz Regional Court held hearings in the case of Khayal TV executive director Vugar Gonagov and editor Zaur Guliyev, who are accused of provoking mass protests that took place in Guba city on March 1, 2012. Presiding judge Anar Ibrahimov heard testimonies of the journalists and several other witnesses.

In his testimony, Vugar Gonagov said that, following the November 22nd2011 meeting where Guba mayor Rauf Habibov insulted local residents, he had a meeting with a chief of Guba Municipality Elkhan Aliyev where the latter asked the journalist about the video recording of the scandalous meeting.

“I told him that we had deleted that recording at the request of the regional administration on November 23, 2011. Elkhan Aliyev asked me to provide him with a part of the footage with the mayor’s speech, as he was about to make a complaint against Mayor Rauf Habibov for insulting Guba residents and needed evidence to support it. I edited the video and provided it on two different discs to ZaurGuliyev. Then I took them from Guliyev and gave to Aliyev. Those videos bore the logo of YouTube. On February 25, I was invited to Guba Executive Power, where they told me that this footage was disseminated on social networks by a user named Mustafa Nurullayev and asked whether I knew how to remove the video. I asked my colleagues, who said it is impossible to remove the video” stressed Gonagov.

Gonagov also stated that although he was arrested on March 13 2012, the lawsuit against him was only brought on March 17 2012. “The lawsuit stated that I had prepared this video at the proposal of municipal head Elkhan Aliyev and posted it on social networks under the nickname of Mustafa Nurullayev” said Gonagov, who also emphasized that he had provided his initial testimony under pressure and in the absence of a lawyer.

In his turn, editor Zaur Guliyev claimed that he is innocent and that he had not taken part in preparing the said video and publishing it on the internet.

The next hearing is scheduled for January 15, 10 am.

After the online dissemination of a video in which RaufHabibov (the then chief of Guba Executive Power) insulted Guba citizens, there was a riot in Guba on March 1st. The citizens set Habibov’s house on fire and there were clashes between people and the police. After the protests president Ilham Aliyev dismissed Rauf Habibov from his post. On March 13 Khayal TV correspondents Vugar Gonagov and Zaur Guliyev and up to 20 other Guba residents were arrested in connection with the Guba protest. The trial of 8 of them is underway in the Guba City Court.

Journalist’s trial postponed due to lack of legal defense