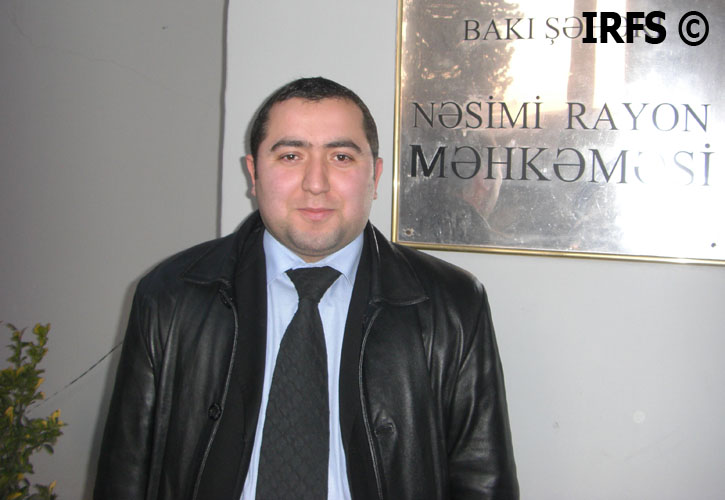 Today in the Nasimi District Court, under the chairmanship of Judge Ikram Shirinov, a hearing on “Irelli” Youth Movement Press Service head Mais Musayev’s lawsuit against “Yeni Chag” Newspaper Chief Editor Agil Alesgerli (Agil Farajov) was conducted.
In the hearing Alesgerli introduced a legal complaint against Musayev. Musayev and his lawyer, Shahin Ismayilov were famalized with the document and it was added to the case materials.
After this, the judge recommended that the two sides reconcile. Musayev said, “I am ready to reconcile when the opposing side publishes a refutation in his newspaper and the newspaper’s electronic version.”  In response to this, Alesgerli told the court that it was Musayev who first wrote something about him. “If he takes the first steps toward reconcilation I am ready,” he said.
The judge then asked Musayev if he had truly written about Alesgerli first, and Musayev admitted this was true.
Then the judge gave the two sides time to reconcile and scheduled the next hearing on this case for tomorrow, 15 February, at 5 p.m.
Recall that in the 8 Decmeber 2007 issue of “Yeni Chag” Newspaper an article entitled “'Irelli's action plan of Pro-Fatullahs." Musayev believes that the article insulted his honor and dignity. He is seeking the closure of “Yeni Chag” Newspaper, the publication of a refutation, and the institution of a 60,000 AZN fine against the paper.