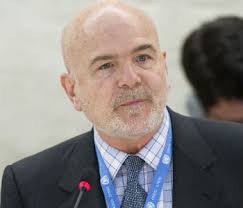 On September 19, UN Special Rapporteur on the situation of human rights defenders Mr. Michel Forst met with jailed political prisoners. The rapporteur met with opposition party APFP’s Deputy Chairman Fuad Gahramanli in Baku detention facility No.1. According to Fuad Gahramanli’s relatives, Mr. Forst and Gahramanli had an exchange of views on political and human rights situation in the country and recent politically-motivated arrests. Fuad Gahramanli’s arrest for his Facebook posts was one of the focal topics of the meeting, and Mr. Forst promised to give detailed information on this matter to the leadership of the organisation that he represented upon his return.

In Baku detention facility No.1, Mr. Forst also met with Musavat Deputy Chairman, blogger Faraj Karimli and journalist Seymur Hazi, who despite falling under the amnesty law have not been released.

Michel Forst further met with REAL Movement chairman Ilgar Mammadov in Prison No.2. Ilgar Mammadov’s wife Vafa Mammadova cited her husband as saying that he had high level discussions and a detailed conversation with the rapporteur.

Background: Mr. Forst’s visit began on September 14 and will end with a final press conference on September 22. The visit takes place at the invitation of the Azerbaijani government. During the visit, the special rapporteur will meet with officials, court employees, human rights defenders, civil society representatives and diplomats. Forst will present his report on the results of the visit at the Human Rights Council in March 2017.

Youths Sentenced to Administrative Detention for Participating in Protest Rally