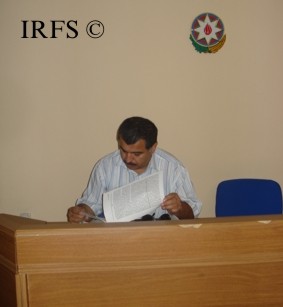 "Gundalik Azerbayjan" Newspaper Editor Uzeir Jafarov received hundreds of threatening phone calls within a span of two days.
Jafarov himself told this to the Institute for Reporters' Freedom and Safety. According to Jafarov the calls started on January 28 in the afternoon. "The caller told me 'We will destroy you,' 'We will haunt you," and made other similar comments. After this the calls consisted of just giggling in the background and the sounds of a hand hitting something.  The calls continued on the following day. On January 28 300 calls came, while on the next day this figure exceeded 600. Therefore I appealed to Azercell (ed. Jafarov's mobile telephone service provider). But there they told me that I have appeal to the police department in the district in which I am registered. So I went to Binagedi District Police Department #5 and met with Chief Jabrayil Valiyev.
Interestingly, these calls kept coming while I was in the waiting room and in the chief's office. Although the police on duty and the chief of the department attempted to talk to the caller they kept silent. Jafarov added that the head of the police department accepted his application and promised to send a questionnaire to Azercell on this case. "My friends and I have been checking today to see whether the questionnaire has been sent or not," said Jafarov. "There's no news yet. If this case is not investigated I'll be convinced that these calls originated from a central point, although I believe that this matter will be solved."
Previous Post

STATE CENSORSHIP BEING RESURRECTED IN AZERBAIJAN