Verdict to be passed on Guba journalists 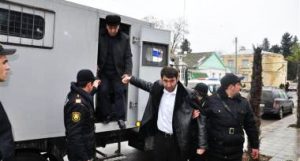 On March 12th Khachmaz District Court held a hearing on the case of Khayal TV executive director Vugar Gonagov and editor Zaur Guliyev, who were arrested in connection with March 1 protests in Guba city. Judge Anar Ibrahimov presided over the hearing. The journalists’ lawyers told the judge that their clients had not committed any crime, the charges filed against them were not proved, they had not been provided withattorneys when they were detained and were tortured while in detention. Thus the lawyers asked for acquittal of the arrested journalists.

In their final speech the journalists repeated that they were innocent and asked for a fair decision.

In an interview with the Institute for Reporters’ Freedom and Safety (IRFS) journalists’ lawyer Rashid Hajili said his clients did nothing illegal but exercised their constitutional right. “Journalists have the right to disseminate information, whether it sparks protest in society or not. Those, who filed such absurd charges against the journalists, must be unaware of Azerbaijani Constitution and other international legal instruments ratified by Azerbaijan” said Hajili.

The final verdict on the journalists will be passed on Mach 15th.

Background: After the online dissemination of a video in which RaufHabibov (the then chief of Guba City Executive Power) insulted Guba citizens, there was a mass riot in Guba on March 1st. The citizens set Habibov’s house on fire and there were clashes between people and the police. After the protests president Ilham Aliyev dismissed Rauf Habibov from his post. On March 13th Khayal TV correspondents Vugar Gonagov and Zaur Guliyev and up to 20 other Guba residents were arrested in connection with the protest. Gonagov and Guliyev are accused of infringement of public order (Article 233/Criminal Code) and abuse of position (Article 309/Criminal Code).