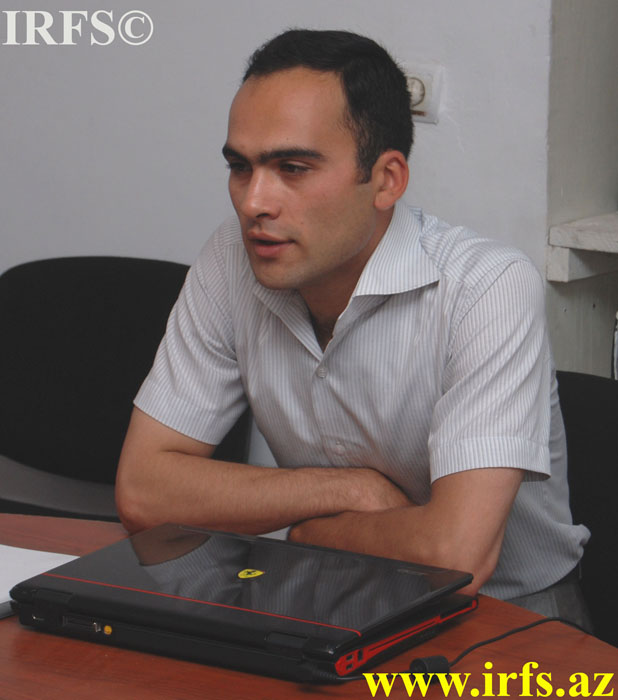 Today, 9 July, in the press center of the Institute for Reporters’ Freedom and Safety, independent journalist Vugar Gurdganli conducted a press conference.

During the conference, Gurdganli said his goal is to express to the public his puzzling situation.

Six months ago, as a result of an article about Yevlakh City Executive Administration head Elmar Valiyev that was written by Gurdganli and published in “Khural” Newspaper, Gurdganli was sentenced to 1.5 years of corrective labor, during which he must give 20 percent of his earnings to the government.  Gurdganli noted that his article was written citing a letter to the president that details illegal events occurring in Yevlakh.

Speaking about his court-order punishment, he said, “However, to pay this money, the court executors are demanding a certificate from a concrete place of employment, but I am working for newspapers, including ‘Khural,’ only as a freelancer. Therefore I cannot acquire such a certificate. The court executors have offered to find me a job as a laborer and then to demand a certificate from this place. But I am not a laborer, I am journalist who was imprisoned under articles 147 (insult) and 148 (libel) of the Criminal Code.”

Concluding, Gurganli said he will never work anywhere as a laborer, and if this means he will be imprisoned, he is not afraid of this.