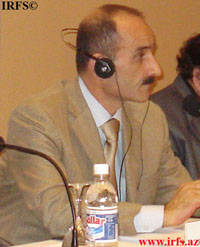 Yesterday well-known journalist Mammad Nazimoglu passed away at the age of 49, after battling disease for some time.
M. Nazimoglu was born in 1959 in Nemetabad village of the Agdash region. He graduated from the journalism faculty of Baku State University in 1983. Nasimoglu, who was one of the creators of “Aydinlig” newspaper (“Aydinlig” was one of the first independent publications in independent Azerbaijan),  and also worked at “Khalg Gazeti”, “Ulus”, “Avropa”, “Yeni Musavat”, “Azadlig”, “Shans” and other newspapers. He was also a writer for the “Gulp” program broadcast in ANS TV, and has been recently acting as the executing director of the Freedom of Speech Defense Fund.
M.Nazimoglu was buried in the village where he was born.