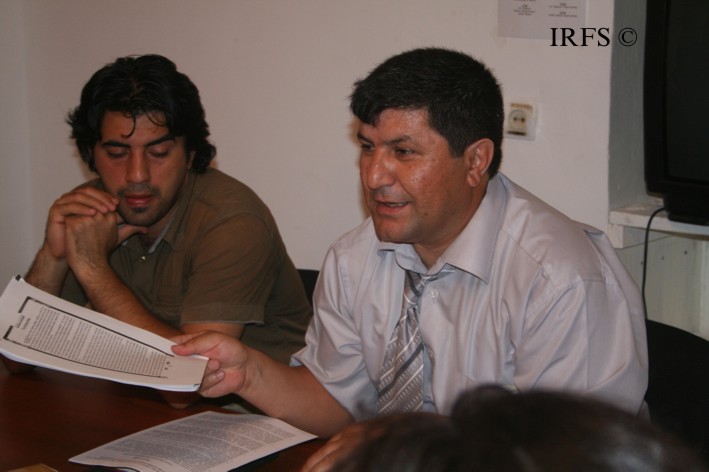 Today in the Narimanov District Court under the chairmanship of the Judge Asif Abdullayev another court hearing on Yevlakh community’s lawsuit against “Khural” Newspaper was conducted.
During the court hearing three participants were interrogated as witnesses. Kubra Aliyeva, chief reviewer of Garabakh War Invalids, Veterans and Martyr Families public union noted that, the article published about Elmar Valiyev is wrong. E.Valiyev never treats badly with any one. He provided 36 martyr families with houses.

Another witness Ridvanova Saniya during the court hearing noted that, “I also agree with K.Aliyeva’s sayings. This period of time belongs to neither Aliyevs, nor Valiyevs. This period of time belongs to the people. People can’t exist without Heydar and Heydar can’t exist without people. At the end of her speech she noted an interesting fact about Yevlakh city. According to her, during his trip to Yevlakh the president of the country called Yevlakh first categorical city among European cities”.

Third witness Aziz Azizov Yevlakh Department chairman of Garabakh War Invalids, Veterans and Martyr Families public union added that, “I protest about Martyrs’ Avenue part of the article. I think this part humiliates martyrs’ spirit”.
The Judge scheduled the next court hearing on December 27 at 16:00.