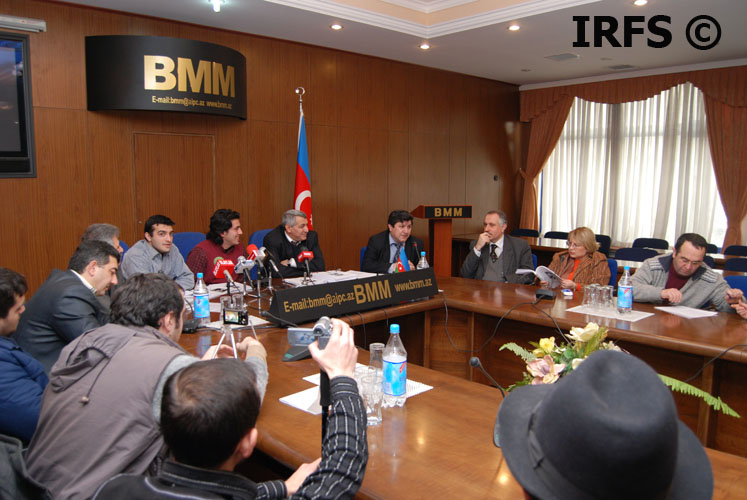 Today the Working Group of the Institute for Reporters’ Freedom and Safety that conducted a parallel investigation into the case of imprisoned “Bizim Yol” correspondent Mushfig Huseynov introduced its first special report.
Opening the press conference, IRFS Chairman Emin Huseynov said that the working group was formed on 3 August 2007, and worked with other organizations and Huseynov’s lawyer Vugar Khasayev to gather information.  He then proceeded to read the report. In the report it is written that Huseynov committed no criminal act, and the actions of the investigative organs, state officials and court prove the Huseynov’s arrest was politically motivated.
After this, Huseynov’s lawyer Vugar Khasayev spoke. He said that that M. Huseynov met with Ministry of Labor and Social Defense Administration head Rizvan Aliyev 40 days before the journalist was arrested. So if M. Huseynov had at that time wanted a bribe in exchange for not publishing compromising materials in newspapers, why didn’t R. Aliyev immediately appeal to law enforcement agencies.

Khasayev also said, “M. Huseynov’s court trial was conducted at the same time as the trial for a ranking official in Baku City’s Executive Administration who admitted to taking a 250,000 USD bribe, but that official was only given a suspended prison sentence.”

Media Rights Institute Director Rashid Hajili said, “In all cases M. Huseynov is a journalist, but a journalist cannot be imprisoned as a ranking official. There are blatant violations in this case, and the verdict is purely a political order. The verdict was given because M. Huseynov was a critical journalist.”

Institute for Peace and Democracy director Leyla Yunus said that M.. Huseynov’s name has been included on the Human Rights Association’s list of political prisoners. She added that on 13 March the Monitoring Committee of the Council of Europe will decide whether or not to appoint a special rapporteur for political prisoners in Azerbaijan. Yunus recommended the preparation of an appeal calling for the release of all four of Azerbaijan’s wrongfully imprisoned journalists (M. Huseynov, Sakit Zahidov, Eynulla Fatullayev and Ganimat Zahid).

“Khural” Newspaper Chief Editor Avez Zeynalli said that in general the arrest of journalists weakens Azerbaijan’s press. Zeynalli also recalled that his newspaper also wrote critical articles about the Ministry of Labor and Social Defense, and after M. Huseynov arrest someone was sent from the ministry to “Khural” Newspaper’s editorial office offering a 10,000 AZN bribe. After the newspaper appealed to the president and law enforcement agencies, R. Aliyev was called in to give a statement. In the statement, Aliyev said he didn’t know of any newspaper called “Khural.”

Turan News Agency Director Mehman Aliyev said that he agreed with those people who expressed the opinion that the press was weakening. According to Aliyev there is no free press in Azerbaijan. “Some press institutions and TV channels are unofficially funded by the government,” he said. Aliyev then went on to say, “The operation conducted against Mushfig Huseynov is something that would have been done in Soviet times. It is true that at that time there wasn’t this many imprisoned journalists, but I do recall such methods being used.”

The Working Group’s complete report can be found on IRFS’ website: www.irfs.az .