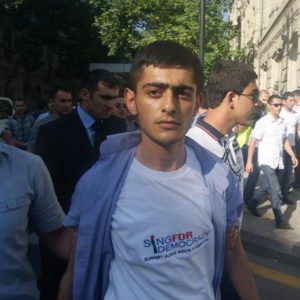 On February 27th member of Popular Front Party’s youth organization, Turkel Alisoy, was called to police office, where he was warned because of his Facebook post. Alisoy told the Institute for Reporters’ Freedom and Safety (IRFS) that he was summoned due his status update, in which he supported the Azerbaijani Students’ Day of Boycott event created on Facebook.

“Today at 8 o’clock in the morning police officers came to our house and took me to Khatai District Police Office #35, from where I was taken to Baku City Main Police Office. I was met by Aliaslan Agayev, head of the criminal-investigation department. They showed me printed screenshots ofmy post, and accused me of calling on students and other citizens to protest. In my written statement, I wrote that I just supported the event. They threatened to file criminal case against me if I continue to be that active and call for protest on Facebook. I was released at 3pm” said Alisoy.

Note that the Azerbaijani Students’ Day of Boycott event was created to protest against illegalities and other shortcomings in the field of education. The event called on high school students not to attend classes on February 27. More than 3,000 Facebook users joined the event.

Commenting on the issue, deputy head of the Interior Ministry press service Ehsan Zahidov told the IRFS that he was not aware of the case and advised us to inquire Baku City Main Police Office (BCMPO). Despite of repeated efforts, we couldn’t reach BCMPO head of press service Galib Arif for comments.