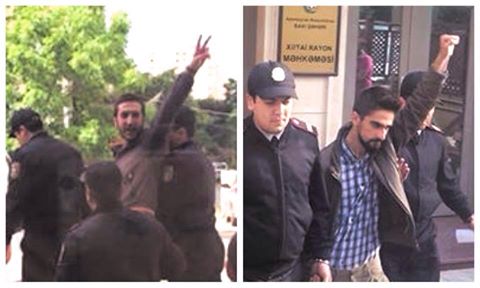 Giyas Ibrahimov and Bayram Mammadov, both NIDA civic movement members and final-year students at Azerbaijan Slavic University, have been arrested on drug charges. Both claim that they have been targeted for exercising their right to freedom of expression.

Youth activist Giyas Ibrahimov wrote “Happy Slave Holiday” and “fuck the system” on a statue of the late Azerbaijani president Heydar Aliyev facing the Central Bank, near the 28-May metro station. Bayram Mammadov took a photo of the slogans on the statue.

Both activists have been charged under Articles 234.4.1 (illegal manufacturing, purchase, storage, transportation, transfer or selling of narcotics, psychotropic substances or their precursors – on preliminary arrangement by a group of persons or an organized group) and 234.4.3 (- in a large amount) of the Criminal Code.

Bayram Mammadov and Giyas Ibrahimov were sentenced to 4-months’ detention by the Khatai District Court on May 12, 2016.

Both activists’ rights are represented by lawyer Elchin Sadigov, who quoted both youths as telling the court that they had been tortured. “Upon his detention, Bayram Mammadov was beaten at Police Office #12 of Sabunchu District Police Department. Later, the Chief of Baku City Main Police Office’s (BCMPO) Mirgafar Seyidov spoke to Bayram Mammadov and Giyas Ibrahimov, and told them to “apologize to Heydar Aliyev’s statue, go on Azerbaijan’s state television AZTV and admit your error, and on this condition only we can free you.” When the youths refused, BCMPO officers physically assaulted them, and even threatened to sexually assault them with a bottle. The two youths were beaten again at the temporary detention facility of Narimanov District Police Department. They were denied food for two days. They were even forced them to clean the closet and the yard of the detention facility. The youths’ bodies bore traces of torture,” said the lawyer.

Sadigov added that both youths told the court that they had been arrested for exercising their right to freedom of expression, and that they had not insulted the statue, but simply expressed their opinions about the political system.

Elchin Sadigov noted that the two youths had accepted the charges brought against them at Baku City Main Police Office under duress. However, at the Khatai District Court hearing on pretrial detention, they rejected the charges and reiterated that their confessions had been extorted through torture.

Thus the Khatai District Court decided to send a request to Baku City Prosecutor’s Office to investigate the allegation. Lawyer Elchin Sadigov said that they would also file a complaint on this matter.

May 10, the birthday of the late Azerbaijani president Heydar Aliyev, is celebrated as Flower Festival. This has been a matter of, public controversy. Those opposing the government policies believe that rather than spending millions on the Flower Festival every year, this money should be used to cover the basic welfare needs of the population.