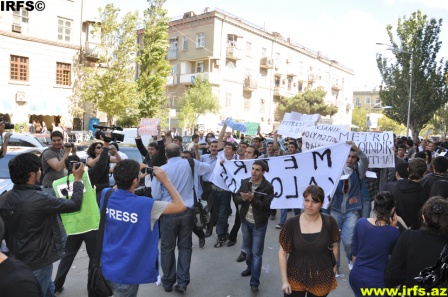 Today, 5 October, a group of young people conducted a protest action against price increase in fares in the Baku Metro Underground.
The protesters marched from the exit of Elmler Akademiyasi metro station to the Baku State University chanting slogans, “Resignation for Tagi,” “Prices must be lowered,” “The metro belongs to the people”. Although police closed the entrance and exit doors of the university, nobody hindered the action participants. The organizers said that they were able to hold the action to the end.
According to the decision of the Tariff Council of Azerbaijan Republic, on 1 October the fare in the Baku Metro Underground was raised three times – to 15 gepiks.
Previous Post