ALI HASANOV: “UNFORTUNATELY EMIN HUSEYNOV WAS IN THE CENTER OF PLANNED PROVOCATIONS” 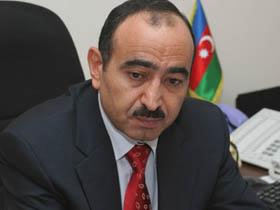 News disseminated about the beating. of Emin Huseynov, the Chairman of the Institute for Reporters’ Freedom and Safety, are being investigated.

According to APA, Head of Socio-political Department of Presidential Administration Ali Hasanov stated this.
Hasanov said that this was a planned provocation, and emphasized that Emin Huseynov has been in the center of this kind of provocations several times. “When missionaries have parties, Emin is there, or when something happens in front of Presidential Administration, Emin is there also. He hasn’t yet defined whether he is a leader of a public union, a reporter, or a journalist. This creates problems for him and people around him,” he said.
A.Hasanov noted that conducting events in the cafés was not prohibited, but emphasized that the events conducted by missionaries in the cafés and restaurants were not good nowadays. “To be concrete, police is investigating the last incident. Missionary works are not just related to religions but also to ideology, ecology and so on,” he added.
A group of fans of Cuban sociologist revolutionist Ernesto Che Guevera was trying to conduct an event in “Alaturka” restaurant when the employees of law enforcement organs prevented it. IRFS Chairman Emin Huseynov, who was there to film the event, suffered injuries.