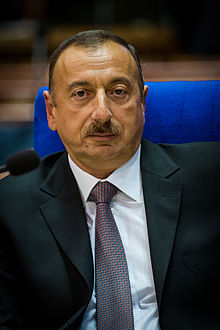 In the lead-up to the European Games, FIDH and other organisations have participated in a variety of activities to address human rights violations in Azerbaijan, including regular exchanges with EU actors and the presentation of the Observatory’s report following their fact-finding mission in Azerbaijan.

On 12 May, FIDH coordinated an NGO protest in front of the European Parliament as part of the « Sports for Rights » campaign, in the presence of Dinara Yunus, daughter of human rights defenders Arif and Leyla Yunus who are currently imprisoned in Azerbaijan, Ulrike Lunacek, Vice-President of the European Parliament and Gerald Staberock, secretary general of the OMCT. This protest preceded the hearing “Baku Games : Run For Human Rights” in the European Parliament which according to reports affected Aliyev’s decision not attend the Summit. The mobilisation will continue ahead of the June Baku European Olympic Games and afterwards.

Offshores Close to President Paid Nothing for State Share of Telecom