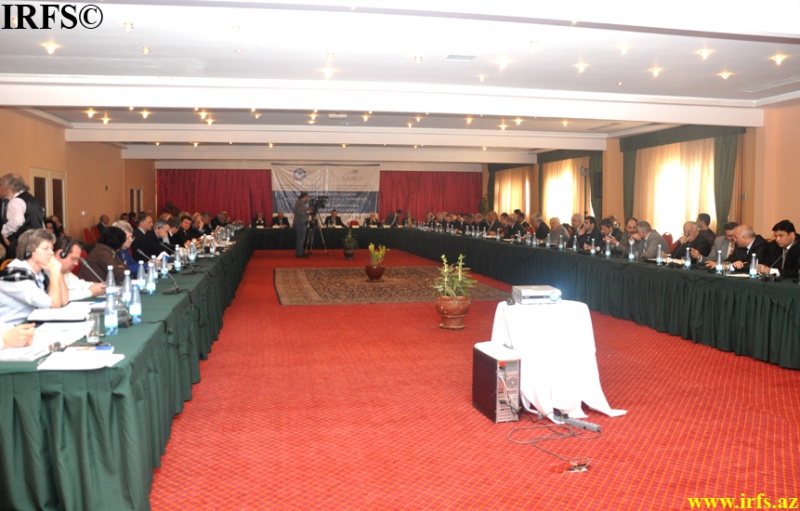 Today, 12 March, the Strategic Investigations Center under the President in Baku and the International Working Group on Application of Human rights held a conference on the theme “Media in Democratic Society: International and Local Experience.”
Milli Mejlis Law Policy and State Building Commission Chairperson Ali Huseynov said that the changes made to article 32 of the Constitution during the referendum and changes made to law on mass media a month ago were advanced and that these changes were made for the sake of securing citizens’ rights to personal and family privacy. Hasanov noted that this change was made to relevant legislations a month ago and wouldn’t create any problems. He added that articles 147 and 148 that envisage imprisonment for libel and insult are not applied in practice; these articles remain in the legislation as means of pure warning.
IREX Azerbaijan Representative, Lawyer-expert Alasgar Mammadli said that these changes haven’t come into force yet, and it is too early to speak about any results. According to Mammadli, the ban against filming and photographing excluding operational-investigation cases is a restrictive change. He also noted that there were 26 defamation cases in 2005 and these cases increased the following years. “This is a serious problem,” said Mammadli.
Institute for Reporters’ Freedom and Safety Representative Rasul Jafarov recalled that the Editor-in-chief of Gundelik Azerbaijan and Realniy Azerbaijan Newspapers Eynulla Fatullayev was first arrested under article 147 and added that there have been three defamation cases in 2010 already and one journalist was punished. Speaking about Azadlig Newspaper Editor-in-chief Ganimat Zahid, Jafarov emphasized that the person who organized Ganimat’s arrest is presently in prison at, and the judge that sentenced him was distanced from her post due to serious law violations. All these factors show that Ganimat Zahid was imprisoned not for hooliganism, but for his articles. Jafarov touched upon issues related to new media and said that youth bloggers were arrested over trumped-up charges; this was proved during their trials.
Tezadlar newspaper’s editor-in-chief Asif Merizli said that it was positive that he was released after the president’s interference to this problem. A.Merizli touched upon the court conflicts with Council of Media, and said that they were subjected to sanctions by the Council of Media calling them a “racketeering publication”.  He stated that they faced problems in getting advertisements after the decision of Council of Media.

The chief Investigations Center’s representative under President T.Allahyarova said that she is studying international standards regarding Azerbaijani media and the problem concerning social networks and blogs is related to security. She noted that there are wide spread articles not based on any facts, despite the presence of analytical writings in Azerbaijani media. Tahire Allahyarova expressed her attention to Rasul Jafarov’s speech regarding imprisoned journalists, and said that there is truth in his speech but it is a little problem in comparison with the existence of one million refugees.

Norway Journalists Union`s member Kyetil Hanes said that there are a lot of press organs in Azerbiajan that do good work, and said that he regrets the arrest of 2 editors-in-chief and 2 bloggers. K.Hanes said that it is necessary to protect journalists against attacks and he proposed that these issues noted in the final resolution to be adopted.

Justice Ministry Representative Rahib Rahimov expressed his opinion regarding court practice and statistic numbers, and said that the opinion voiced don’t conform to reality, and imprisoned journalists were not arrested for their work. He also said that the amount of cases regarding the issue of honor and dignity in the court is decreasing. Final resolution was adopted at the end of the conference.