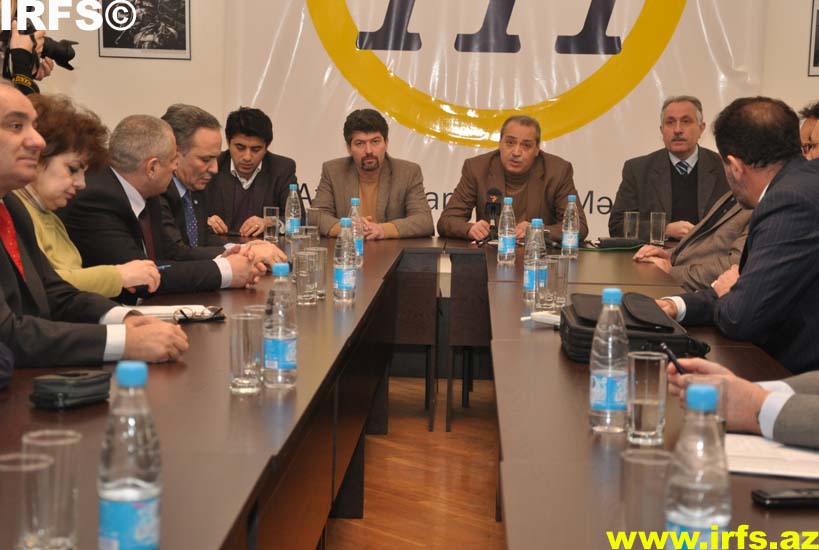 Today, 1 March, in the Azerbaijan Media Centre the first conference was held in the framework of ten day events plan regarding the fifth anniversary of Monitor journal’s editor-in-chief Elmar Huseynov’s murder.
Elmar Huseynov Fund Co-founder Shahbaz Khuduoglu opened the event and said that 5 years have passed since Elmar Huseynov’s murder, but people who ordered this murder and its executors have not been found yet.
Turan Information Agency Director Mehman Aliyev said that as a citizen and colleague, he considers it an insult for himself that E.Huseynov’s murder has not been solved yet. “Before, we believed that Elmar’s murder was committed by foreign powers or internal alliances,” said M.Aliyev. “But the indifference of Azerbaijani government shows that they are not interested in the disclosure of this crime and the president knows the people behind this murder.”
Member of Parliament Igbal Agazade said that he will try to include this issue – finding E.Huseynov’s murderers and release of imprisoned Eynulla Fatullayev and Ganimat Zahid who are known as prisoners of conscience – in the parliament’s agenda.
“Yeni Nasil” Journalist Union Chairman Arif Aliyev said that E.Huseynov’s murder reduced citizens’ faith in law-enforcement organs.
Press Council Chairman Aflatun Amashov said that although 5 years have passed, there should be no place for pessimism. He added that he hopes the criminal case will be solved.
Journalist Tofig Turkel objected to Aflatun Amashov`s opinion about pessimism. He pointed out that attacks against free speech increased after Elmar Huseynov`s murder. Although a lot of journalists were subjected to physical pressure, he people responsible for these actions have gotten off with complete impunity.
MP Ikram Israfil emphasized that it is necessary to take definite measures to immortalize Elmar Huseynov`s memory.
Institute for Reporters` Freedom and Safety Chairman Emin Huseynov said that although information inquiries related to the proceedings into the criminal case regarding Elmar Huseynov`s murder were sent to the National Security Ministry, Chief Prosecutor’s office, and Interpol Baku Bureau. However, IRFS never received any responses. E.Huseynov noted that Interpol was not successful to find suspected persons in the murder – Tahir Khubanov and Teymuraz Aliyev.
Ambassador of Norway to Azerbaijan Yon Ramberg said that he regrets that Elmar Huseynov’s murder was not solved and called Elmar Huseynov the “Friend of Norway”.
Tomorrow, at 3:00 p.m. in Fakhri Khiyaban III, colleagues will visit Elmar Huseynov`s grave regarding the fifth anniversary of his murder.
A criminal case was opened regarding the murder of Elmar Huseynov who was killed on 2 March, 2005. However, the executors and people behind his murder have not been found to this day.