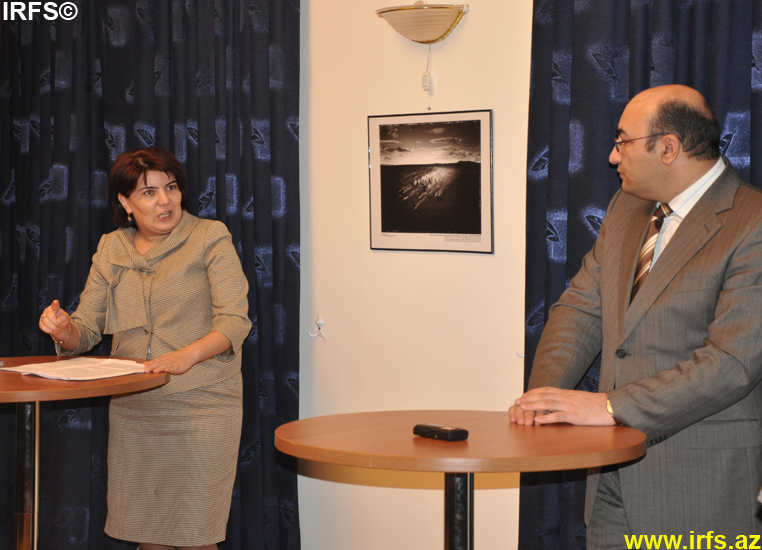 Today, 19 February, in the Azerbaijan Media Center, a debate was conducted regarding the amendments and changes to the law “On Mass Media,” “On Freedom of Information,” “On operational-investigation activities,” “On intelligence and counter-intelligence activity,” and “On Obtaining information” with the participation of Umid Party Chairman, MP Igbal Agazade, and APA Information Agency Director Vusala Mahirgizi.
Igbal Agazade said that the adopted amendments and changes will directly interfere in the activity of journalists. He noted that when law draft was discussed, an initiative was put forth to apply the proposed bans during the gathering of information regarding personal life; however, this was not considered: “The government will use these changes as they please,” added Igbal Agazade.
Vusale Mahirgizi said that this issue should have been objected to when similar amendments and changes were made to article 32 of the Constitution during the referendum held in March last year. She advised journalists to not get lost in pessimism. “Journalists had problems getting information before this law too; they were beaten and their equipment was broken. People who want to generate problems for journalists do so whether there’s a law or not,” said Mahirgizi.
Media Rights Institute Director Rashid Hajili participated in the event as an expert. He said that the application of this law will be a violation of article 10 of the European Convention.
On 12 February, the following changes were adopted to the law “On freedom of Press,” “On Mass Media”, and “On obtaining information” in the meeting of Milli Majlis:
“Excluding operational-investigation cases, following someone, and subjecting them to video, photo or voice recording by media representatives and other persons without them knowing it or with them objecting to it is punishable as defined by law.”