EDITOR CONDUCTS A PRESS CONFERENCE REGARDING ARREST OF HIS SON 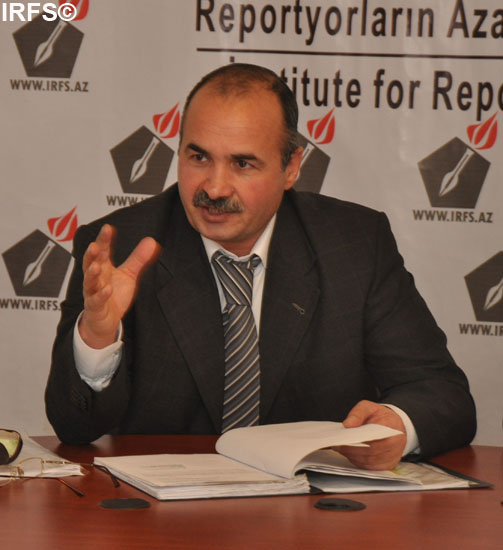 Today, 2 February, in the press center of the Institute for Reporters` Freedom and Safety, Hurriyet newspaper editor Suleyman Mammadli conducted a press conference regarding the arrest of his son Altay Mammadli.
In addition to alluding to the fact that his son went to military service in 2008, S.Mammadli added that his son was subjected to physical and moral pressure repeatedly. S.Mammadli emphasized that Beylagan military unit #N Commander Elsever Akhundov was behind the torture used against his son. S.Mammadli said that he appealed to the Defense Ministry, the Chief Prosecutor’s Office, the National Security Ministry, the Military Prosecutor’s Office, and other organizations regarding this issue, but he hasn’t seen any result yet.
S.Mammadli said that his son, who was released from the National Army on 6 October 2009, was invited to the military unit for confrontation regarding the beating of one soldier on 10 November. Then he was sentenced to two months pre-trial detention in the Military Court in Agdam.
S.Mammadli stated that his son being supervised, the use of physical and moral pressure against him during his military service, and his arrest are all related to his journalist activity.
Photo: http://www.irfs.az/component/option,com_datsogallery/Itemid,30/func,viewcategory/catid,416/lang,az/
Video: http://www.irfs.az/content/view/3392/31/lang,az/
Previous Post

CHANGES MADE TO ADMINISTRATIVE PENAL CODE