“ELMAR HUSEYNOV’S NAME WILL PERSEVERE AS SYMBOL OF FREEDOM” 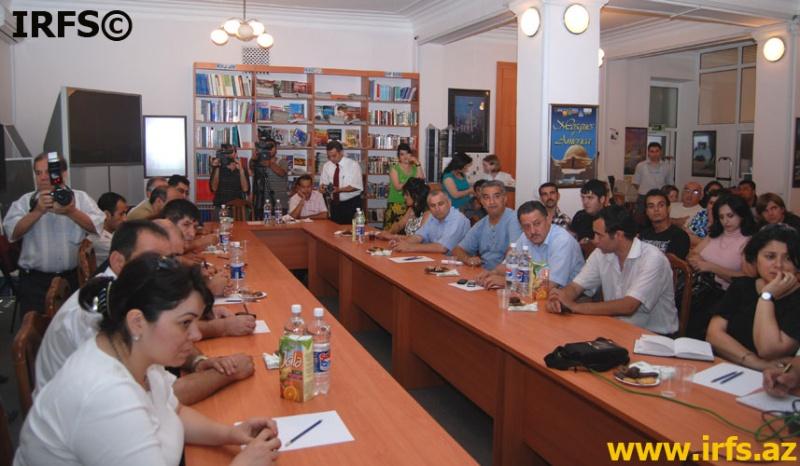 Two journalists – “Radio Liberty” correspondent Babak Bakir (for his “Black Page of White Death” radio report) and “Mediaforum” News Agency correspondent Aynur Imanova (for her “Integration of imprisoned Women into Society” published article), were recognized. They both received a diploma and 1,000 USD award.

The award presentation ceremony opened with an audio program put together by “Radio Liberty” about Elmar Huseynov. This program was prepared on the basis of voice reports from journalists who went to the murder scene the night when Elmar Huseynov was killed.

Today was slain journalist “Monitor” Magazine Editor-in-chief Elmar Huseynov’s birthday. A slide show on E. Huseynov’s life, work, death and the situation following his death, prepared by the Institute for Reporters’ Freedom and Safety, was also shown during the event.

Later “Elmar Huseynov” Fund Co-founder, “Ganun” Publishing Houses Director Shahbaz Khuduoglu talked about the project that they are carrying out.  According to Khuduoglu, the project was made possible through a 25, 000 USD grant allocated by the U.S. State Department. To conduct research, with the framework of the project, 18 journalists representing print media received 300 USD, and three people each received small grants in the amount of 500 USD. Eight journalists submitted their work to the competition and the winners were chosen out of these.

Editors-in-chief, journalists, NGO representatives, politicians, and representative from the international community participated in the event.