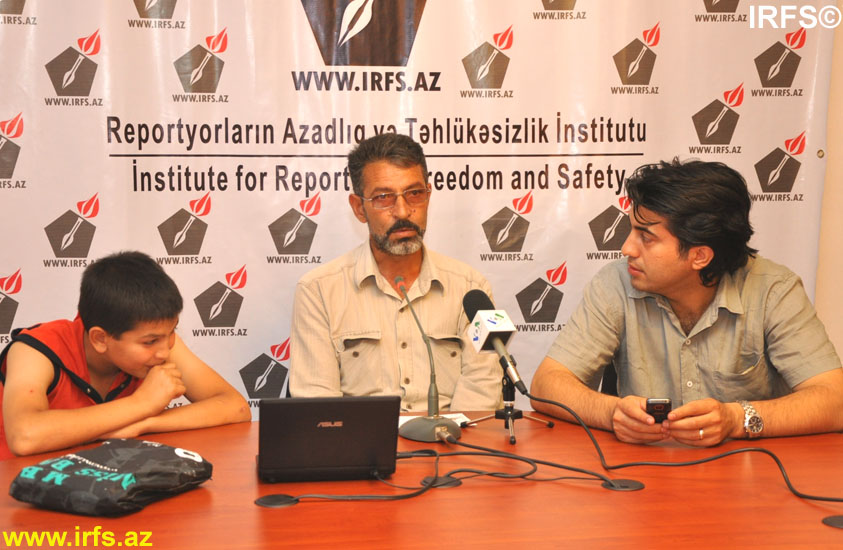 Today, 29 June, in the press center of the Institute for Reporters’ Freedom and Safety, “Azadlig” newspaper satiric/journalist Sakit Zahidov conducted a press conference. Zahidov said that Naftalan region Executive Administration Head Musa Musayev wants him to pay 400 AZN in fines. In 2005 three parliamentarians of Milli Mejlis – Musa Musayev, Ahad Abiyev and Khidir Alovlu filed a lawsuit in Narimanov District Court claiming that they were insulted in the poems written by Sakit Zahidov and demanded that he pay 30 AZN for each plaintiff.
“Although I received an invitation from court back then, I did not participate,” said S.Zahidov. “In 2006 I was slandered for possession of narcotics and arrested. Therefore, this case was moved to the backstage. Now it turns out, the court adopted a decision for me to pay 400 AZN to each plaintiff and to publish a refutation.”
Several days ago the Narimanov District Court Executors Department sent him a letter regarding the execution of the decision, according to S.Zahidov.
Stating that this decision was ordered by the government, S.Zahidov emphasized that he neither plans for paying a fine nor publishing a refutation.
“Only if pears in our yard in Shamakhi region are ripened, I can sell them and pay this money. I will do my best so Musa Musayev gets the best of the pears,” said S.Zahidov adding that he will file an appeal against the decision of the Narimanov District Court.
S.Zahidov noted that he will appeal to court in connection with Press Council Chairman Aflatun Amashov. “This person does not speak his own words, but on behalf of officials that manage him. He calls a number of newspapers ‘racketeering’ newspapers, but he himself is the real racketeer,” said Zahidov.