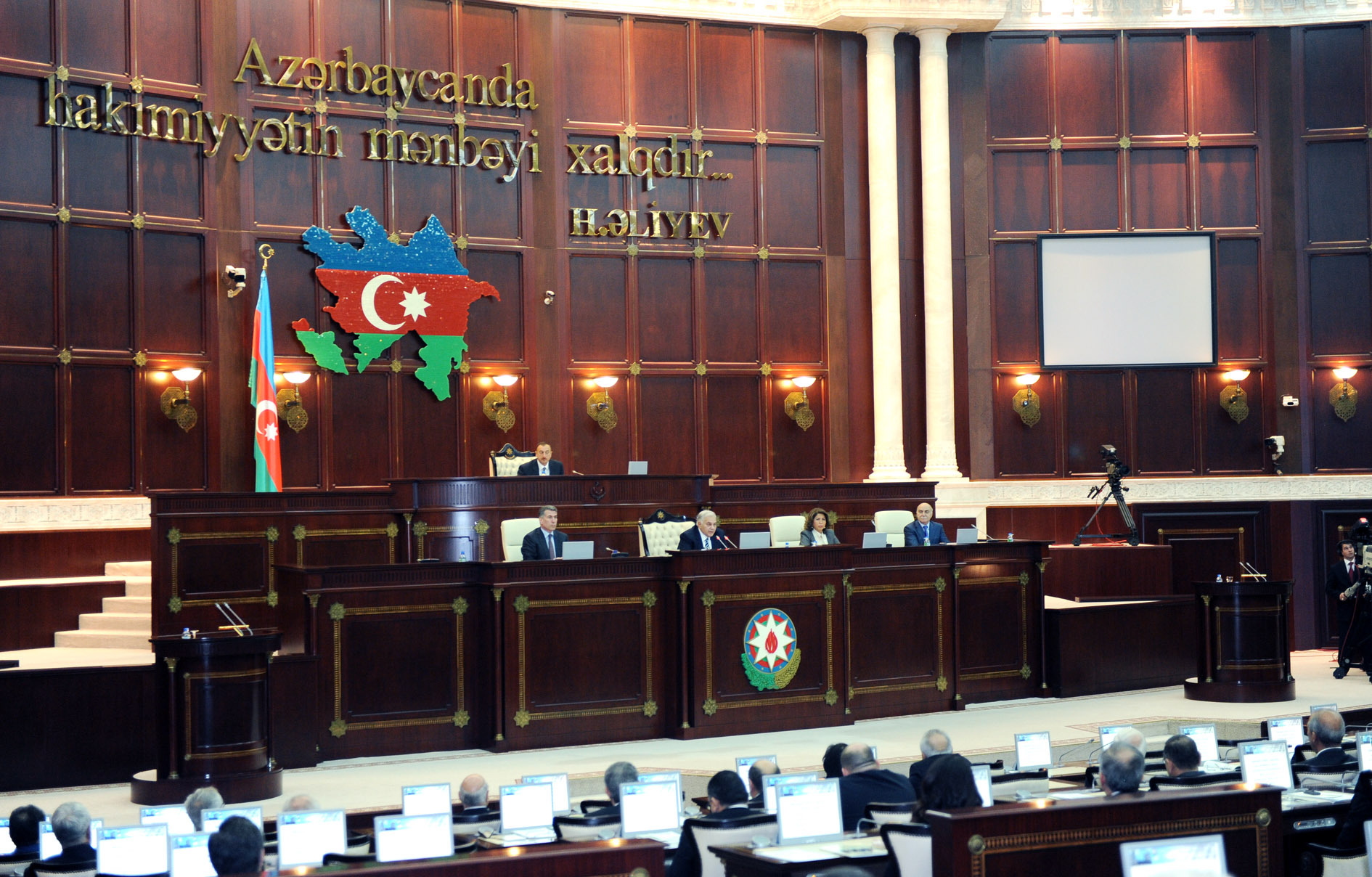 On December 16, the chairman of the US Helsinki Commission, Chris Smith introduced the Azerbaijan Democracy Act to Promote Rule of Law, Human Rights), HR 4264, a landmark bill that will deny US visas to senior members of the Azerbaijani government for human rights violations.

The spokesman of Azerbaijan’s Ministry of Foreign Affairs, Hikmat Hajiyev, has provided an official comment on the bill. “The Azerbaijan Democracy Act bill is completely anti-Azerbaijani and unacceptable. The authors of this document intend to cast a shadow on the successful cooperation between Azerbaijan and the US in energy security, the fight with terrorism, the economy and others. The bill shows once again that Azerbaijan, as an important player in strategic projects, such as the Baku-Tbilisi-Kars railroad, TAP/TANAP gas pipelines, and restoration of Great Silk Road, and an oasis of stability and security in a complex geopolitical area with its policies based on the people’s will, makes anti-Azerbaijani circles seriously concerned,” said Hajiyev.

Today, (December 23), Deputy Chairman of the Committee on Legal Policy of Azerbaijan’s Parliament, MP Rovshan Rzayev confirmed in his interview with Turan News Agency, that he has prepared a bill titled “Situation with human rights in the United States.” The bill suggests that “freedom of expression and freedom of press” are “limited due to surveillance”. “Electoral fraud”, “corruption” and “biased  position on the Karabakh conflict” are mentioned in the document. The bill would deny visa to inter alia, government officials and their families; members of Congress and Senate, journalists, “groups discrediting Azerbaijan “ and their families; “individuals receiving financial support from U.S. government”.   The bill would call on suspension of  all existing types of bilateral cooperation including in energy and military sphere. The U.S. NGOs should be banned and their bank accounts frozen, as suggested by the draft bill.  Rzayev said he is likely to submit the bill to the parliament quite soon, probably even by the end of this year.

Last week, Milli Majlis (Parliament of Azerbaijan) held its scheduled plenary session, which started with a discussion of the bill.

Ogtay Asadov, YAP, Chairman of Parliament said that there is no need to worry about the bill, because its author is “an ordinary commission and the bill will not be accepted by Congress. “A pardon decree is expected to be signed at the end of December. They want to claim that the Azerbaijani government released the people as we asked. On the other hand, they want the people that they mention to not be released, so that they can put pressure on Azerbaijan. Thus, they want to involve Azerbaijan in a provocation.”. The Speaker of the Parliament asked the US Embassy in Baku to clarify whether these are the views of a congressman or the United States. The embassy responded that they do not comment on bills.

Samad Seyidov, YAP member, head of the US-Azerbaijan inter-parliamentary working group,said that at the end of each year, a pardon decree is signed in Azerbaijan and the timing of this bill suggests the US wants to provoke Azerbaijan. He said that this bill was planned in advance. “The bill is a joint action of provocation against Azerbaijan. There will be much pressure on us. They want us to react sharply and inappropriately. But, one needs to keep in mind that it is the position of just one group of people.”

Fazail Agamali, Motherland Party, a member of the Parliament’s committee on legal policy and state-building, said that new attacks have been launched against Azerbaijan. “Azerbaijan pursues the path of democracy. I regret that the United States meets with the separatists from the Nagorno Karabakh despite being a member of the OSCE Minsk Group. The State Department has failed to legally assess such cases so far. The strings here are pulled by the State Secretary John Kerry, who is under the influence of Armenians.”

Zahid Oruj, Member of the Parliament’s Security and Defense Committee, largely pro-governmental MP stated that the US and Azerbaijan should work together in all cases. “Are there congressmen in the US Congress, who are friends with Azerbaijan? Of course there are. Have they ever prepared a bill to support us? No – therefore, we need to strengthen our work with the US.” The Speaker of Milli Majlis, Ogtay Asadov objected to this suggestion, and said that such work is already being conducted, but the Armenian diaspora has strong historical roots, while the Azerbaijani diaspora was only established there 20 years ago.

Siyavush Novruzov, Deputy Executive Secretary of New Azerbaijan Party, Chairman of the Parliamentary Committee on public unions and religious organizations, stated his belief  that the bill will not be accepted by Congress. According to Novruzov, the hearings held at the Commission and the bill were financed by the Armenian lobby.

Fazil Mustafa, Great Establishment Party and a member of the Human Rights Committee of the Parliament believes that it would not be right to express strong reactions given the complexity of international politics at present. Congress has not expressed its attitude to the bill yet. “Receiving grants from abroad has already been sufficiently restricted. An Azerbaijani prisoner is mentioned in the documents. But when he is released, he will be forgotten in a short time. December 31 is approaching. I think the pardon list can be extended. The majority of those in prisons do not possess a special talent to pose a special threat for the country.”

Gudrat Hasanguliyev, United Azerbaijan Popular Front Party and member of the Parliament’s Committee on legal policy and state building said that the US failed to react properly to the falsified referendum in Armenia, while Azerbaijan is being subjected to sanction threats, behind which there are special intentions. “Leyla and Arif Yunus’ recent release demonstrates good will, and a pardon decree is expected. They want to interrupt this process and increase pressure on us. On the other hand, as always, we have once again declared that we are on the side of our brother Turkey. We reiterated our position during the recent visit by Prime Minister Ahmet Davudoglu. The threat from the US at such a time is betrayal of NATO and US allies, and is nothing but toadying to the Armenians. They know that there will be a pardon, and they want to hinder it. Unless there is a pardon, they will gain an opportunity to increase pressure on us. I very much want for the President of Azerbaijan to demonstrate humanity and sign a pardon. Then let’s see what other excuses they look for.”

Aydin Mirzezade, YAP, Deputy Chairman of the Parliament’s Security and Defense Committee, declared that the bill is “another anti-Azerbaijani step taken by the US-based Armenian diaspora and certain circles related to them. In the absence of the Khadija Ismayil issue, they would have found something else with which to attack Azerbaijan. In 1992, when Azerbaijan had just gained its independence, US Congress passed the notorious 907th amendment, and, now once again, there are attempts. It seems that Azerbaijan’s independent policy and growing international reputation worries the Armenian circles in the US. In this case, it is unlikely that the bill will be accepted, because Azerbaijan is not the same as it was in 1992. It is impossible to corner Azerbaijan, which showcases its own model and has a significant international reputation. If the 907th amendment of 1992 could not bring Azerbaijan to its knees, in 2015 such a decision will not have any impact at all on Azerbaijan.”. Mirzezade added that it is not only Azerbaijan that needs the US; the US also needs Azerbaijan. If the bill is passed, Azerbaijan can take counteraction. “I don’t believe that the United States, one of the leading countries in the world, will risk worsening its relations with the leader state of the region. It is not in the best interests of the US. Azerbaijan is one of the major allies of the US. I’ll call this just a political move. In all cases, the US officials have to express their attitude to this issue and re-clarify their relations with Azerbaijan as an ally.”