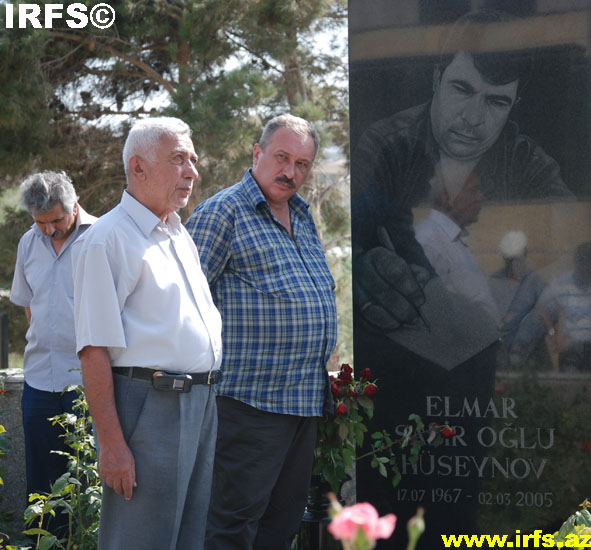 Today (17 July) is the birthday of slain "Monitor" Journal Editor-in-chief Elmar Huseynov. Elmar’s father Sabir Huseynov, journalists, socio-political figures and representatives of diplomatic corps paid a visit to Elmar Huseynov’s grave in II Fakhri Khiyaban. Event participants put flowers on the grave of late editor-in-chief and prayed for him.
“Ganun” Journal’s Editor-in-chief Shahbaz Khuduoglu said that this visit made in connection with Elmar Huseynov’s birthday should not be funeral ceremony anymore, but this place should turn into a place where free speech takes place.

Later Musavat Party Leader Isa Gambar spoke and said that Elmar Huseynov served free speech both before and after his death; as long as his murderers and people behind his murder are at large, the responsibility rests on the shoulders of the incumbent authority.

“Turan” Information Agency Director Mehman Aliyev talked about persecution against the holders of freedom of speech and emphasized that young bloggers Adnan Hajizade and Emin Milli, who were arrested a week earlier, are the victims of these harassments.

US Embassy representative Dmitri Dorokovski said that Azerbaijan’s Authority promised to find the assassins of Elmar Huseynov, but has not fulfilled its promise yet.

Other participants spoke about freedom of speech in Azerbaijan and government’s harsh position against it, and said that Elmar Huseynov is a model for courageous writers.

"Monitor" magazine Editor-in-chief Elmar Huseynov was shot to death in front of his apartment on 2 March 2005. To date the murderers and people who ordered his murder have not been brought to responsibility.