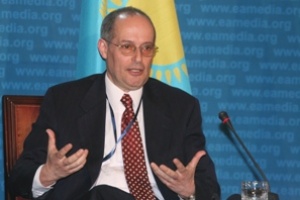 OSCE Media Freedom Representative Miklos Haraszti expressed position on the arrest of “Alumni Network” Youth Organization Coordinator, ANTV Online TV Leader Emin Milli and one of “OL” Youth Organization’s coordinators, well-known video-blogger Adnan Hajizade.
“Hooliganism charges against two opposition bloggers in Azerbaijan are unfounded and the case is fresh proof that freedom of speech is dying in the central Asian state,” said M.Haraszti.  “These are critically-minded young bloggers and I know for a fact that they were fully innocent in the dispute. There was enough eye-witness evidence to prove the men were victims in the attack. The pair went to make a police report but were detained instead.”

Haraszti added that such cases have wider implications for media freedom in Azerbaijan.

The full text can be viewed here: http://www.reuters.com/article/internetNews/idUSTRE56F4Y120090716