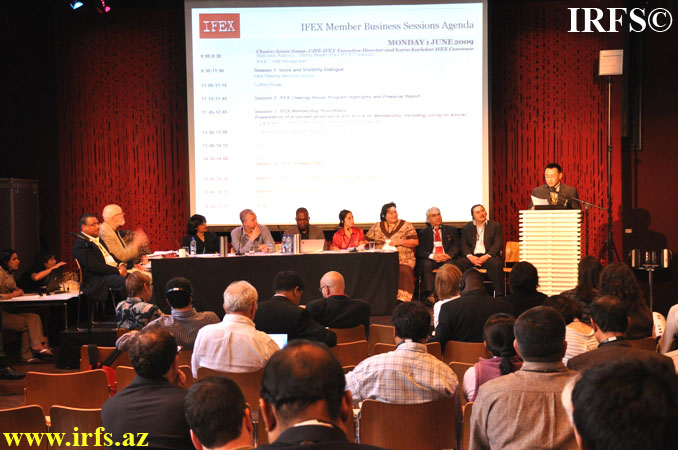 On Monday and Tuesday the International Freedom Expression Exchange (IFEX) held its 14th Annual General Meeting in Oslo, Norway within the framework of the Global Forum on Freedom of Expression. During the meeting, governance and visibility/campaigning issues were discussed, elections were held for the IFEX Council and new members were voted into IFEX.
Institute for Reporters’ Freedom and Safety has put forth a joint appeal about the press freedom situation in Azerbaijan during the General Meeting which was approved and signed by many IFEX members. It will be released in the next few days.
Two organizations from Azerbaijan are members of IFEX, the Journalists Trade Union and the IRFS. Out of these two organizations, two members of IRFS were present in Oslo at the 14th Annual General Meeting; IRFS Chairman Emin Huseynov and IRFS employee Sarah Paulsworth.
Committee to Protect Journalists Executive Director Joel Simon, World Press Freedom Committee Executive Director Markham Bench, International Federation of Journalists General Secretary Aidan White, Article 19 Executive Director Agnes Callamard and many other representatives of local and international organizations were present at the event.
The International Freedom of Expression Exchange (IFEX) is a global network of organizations that work to defend freedom of expression. The network has over 80 members.
Photo:http://www.irfs.az/component/option,com_datsogallery/Itemid,30/func,viewcategory/catid,259/lang,az/
Previous Post