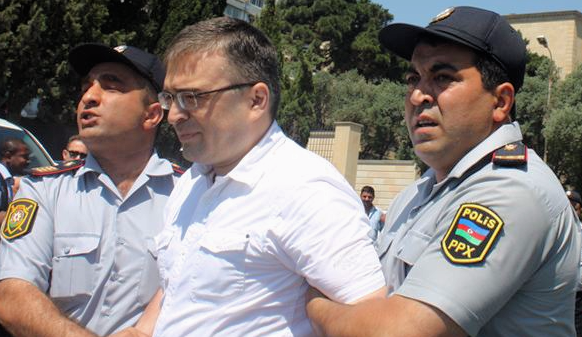 Chairman and opposition leader for Republican Alternative (REAL) party, potential presidential candidate, director of Baku School for Political Studies, Ilgar Mammadov Ilgar Mammadov was sentenced to seven and five years in jail in March 2014, a year after his arrested on fabricated charges. While in jail, Ilgar Mammadov had been put under enormous pressure.

In May 2014, in the wake of Mammadov’s sentencing, the European Court of Human Rights judged that his arrest went against the European Convention on Human Rights. An appeal against this ruling was launched by the Azerbaijani government and rejected on 13 October 2014 by the Strasbourg Court. In calling for the release of Ilgar Mammadov in October 2014, the Council of Europe Secretary General Thorbjørn  Jagland stressed that the earlier decision by the court has now been confirmed and is thus final. On 4 December 2014, Mammadov’s release was demanded by the Committee of Ministers of the Council of Europe. This was ignored.

The jailed leader of the Republican Alternative (REAL) Movement Ilgar Mammadov has been attacked in the Prison #2, where he is serving his sentence, reported the Real Movement in a statement issued on July 30.

“Instead of fulfilling the long-standing European Court’s decision demanding Ilgar Mammadov’s unconditional release, supported by two resolutions from the Council of Europe’s Committee of Ministers, the authorities are continuing to push Mammadov to apply for pardon. Their attempts have taken various forms, from quiet persuasion and inducements, to slander and threats, to punishment by keeping him incommunicado and in solitary confinement. More recently, these attempts have also involved threats of violence and actual physical attacks. Last night, Ilgar Mammadov was assaulted in his cell by persons believed to be acting upon official instructions. He was injured in the attack,” reads the statement.

Azer Gasimli, a member of the REAL Movement, has reported that Mammadov is now in good health, and that his injuries have not had serious consequences.

Ilgar Mammadov fears for his life

After a meeting with the jailed REAL Movement leader Ilgar Mammadov on August 2, his lawyer Fuad Agayev has said that Mammadov believes that his life is in danger. Agayev said he did not want to speak in detail about this threat.

The lawyer also reported that Mammadov’s rights have not been upheld; notably he has not been allowed to make a phone call over the past week. The prison chief has apparently promised to resolve the phone issue.

However, Agayev has been unable to obtain a copy of the decision on Mammadov’s placement in the punishment cell last month. Another worrying development is the physical assault on Mammzdov last week. Although he did not receive serious injuries, he reports that he is suffering from neck pains.

Razim Rzayev, chairman of the REAL Movement Nukha (Sheki) Assembly, was detained by police on July 29. A court in Sheki sentenced him to six days of administrative detention, based on charges under Article 310 of the Code of Administrative Offences (disobeying a lawful police command).