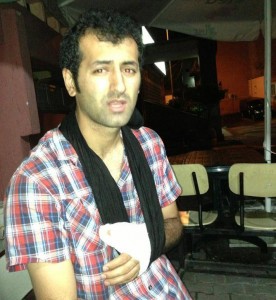 Abbas Atilay, correspondent of Radio Liberty’s Azerbaijani Service, and Yeni Musavat newspaper reporter Farahim Ilgaroglu were injured during a clash between protesters and the police forces in Besiktas township of Istanbul,www.musavat.com reports.

According to the information of Musavat, Atilay suffered arm injury and fractures, while Ilgaroglu was exposed to tear gas. Ilgaroglu said after the incident they were taken to the clinic and provided with treatment. Currently they remain in stable condition.

Note that thousands of people continue to protest across Turkey over the plans to cut down trees in Gezi Park, Taksim Square/Istanbul, and build a large shopping center in its place.