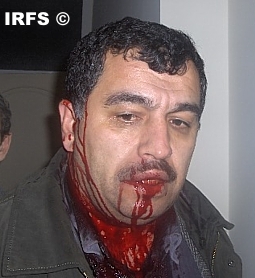 Yesterday (January 25), in the Baku Appellate Court, under the chairmanship of Judge Abid Abdinbeyov, a complaint filed by “Gundalik Azerbayjan” Newspaper editor Uzeir Jafarov was considered.
Jafarov’s complaint stems from the investigation into the 20 April 2007 attack on him outside Gundalik Azerbayjan’s editorial office.
According to Jafarov, during the hearing his lawyer Rashid Hajili told the court that law enforcement agencies approached the investigation into Jafarov’s attack with indifference. Hajili introduced a petition to have investigator assigned to Jafarov’s case come to court. Yasamal District Deputy Prosecutor Rauf Gasimov, who was representing the opposing side, agreed to this petition. Then Judge Abdinbeyov fulfilled the petition, and adopted a decision that in the next court hearing the investigator must come and bring all case materials. The next hearing on this case is scheduled to take place on 28 January 2008 at 11 a.m.
Recall that on the evening of 20 April 2007 Uzeir Jafarov was attacked by unknown men as he left the “Gundalik Azerbayjan” Newspaper editorial office. In connection with this, Yasamal District Police Department #27 opened a criminal case, but the investigation was never completed. Jafarov appealed to the Yasamal District Court about this, but the court threw out his complaint. Jafarov then complained to the Appellate Court about this decision.