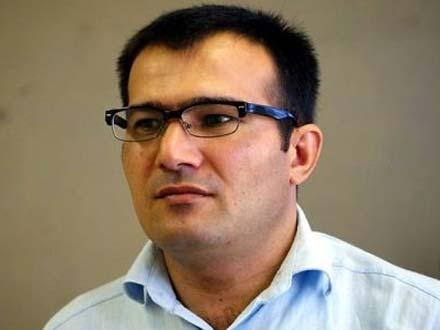 On 29 September, the hearing on the case of Azadliq newspaper department chief and ‘Azerbaijani’ Hour TV program host Seymur Hazi continued at Sumgayit Court of Appeal.

Seymur Hazi was detained after a fight with Maharram Hasanov in the Jeyranbatan settlement of Baku on 29 August 2014. He was charged under Article 221.3 of the Criminal Code (hooliganism using an object as a weapon), while Maharram Hasanov was charged under Article 221.1 (hooliganism). Hazi was sentenced to 5 years in jail by Absheron Regional Court on 29 January 2015.

The court heard part of Seymur Hazi’s final speech before he was interrupted by the judge.

Before I begin my defence speech, I’d like to tell you about something that happened to me the other day. I wanted to prepare a text similar to this speech for the previous hearing. However the management at the detention facility prohibited me from doing so. They confiscated the text of my speech during a security check, and formally reprimanded me for “committing a provocation”. Of course, I did not sign that document. Today, I want to state that my action did not involve any provocation and fully complied with the law. Do you know what really constitutes “provocation” and the “sabotage” of national interests? It’s letting Russian military vessels to come as near as the Maiden Tower (a monument in the downtown Baku, ed) despite extracting the Caspian oil together with Western companies, and, what’s more, during trainings your vessels’ cannons do not fire. This sends a message to the eternal enemy (Russia, ed) that “we won’t fire when you come”, and this constitutes a provocation.

In the past year, 44 soldiers have died, but there has not been even a 44-meter advance or a 4-sentence diplomatic victory. This is what provocation is, Your Honour! This is the sabotage of national interests.

Now, Your Honor, let me defend myself – and indeed Azerbaijan and its people – whose voices are being silenced. The only person in this country who does not require any defence is the one standing before you. I have no complaint to anyone about anyone. Today, I want to take the opportunity to speak from this court for the children whose future has been stolen, and the elderly people whose twilight years have been ruined. I want to point to those who have stolen their welfare and happiness.

Your Honour, it is no secret that by arresting us, they think they have been clever. They set up traps, slander us and convict us on non-political charges. But such behaviour exposes them. They pretend that they love Azerbaijan and are purging the Homeland of traitors. I agree. Ilham Aliyev is so patriotic that he is ready to kill all Azerbaijanis for the sake of Azerbaijan. Like Franco, Hitler, Stalin and Mugabe…

Your Honour! You know yourself that in such circumstances and in this particular trial it is out of place to speak about freedom and rule of law. Like my friends Asif Yusifli, Rashadat Akhundov, Khadija Ismayil, Leyla Yunus, Intigam Aliyev, Tofig Yagublu, Ilgar Mammadov and others, I also do not expect or request freedom from you. I wish the young people who played a role in the government’s dirty scheme against me to live an honest life from now on.

The judge did not allow Seymur Hazi to conclude his speech and hurried out to begin his deliberations. The Absheron Regional Court verdict was upheld.