LAWSUIT TO BE FILED REGARDING ILLEGAL ACTION OF POLICE 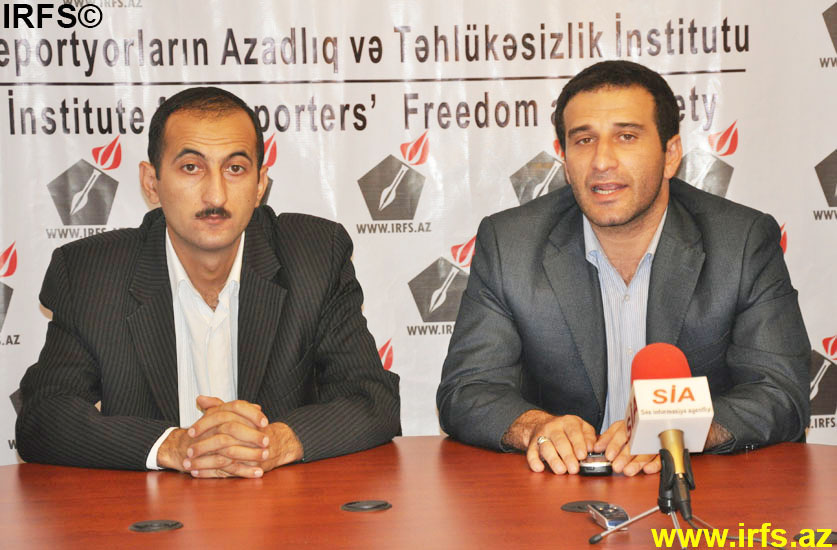 Today, 9 October, in the press center of the Institute for Reporters’ Freedom and Safety, a press conference was held in connection with the arrest of “Milli yol” Newspaper and Poligon Information Agency (PİA.AZ) Editor-in-chief Shahin Agabeyli and his deputy Radil Məmmədov, and the subjection of IRFS employees to physical pressure by police, while they witnessed the arrest, and forceful confiscation of their video-camera and photo-cameras.
IRFS’s employee Idrak Abbasov said that S.Agabeyli told them that “Milli yol” newspaper and Poligon Information Agency’s office located in the intersection of Rasul Rza and Bashir Safaroglu streets was surrounded with civil clothed police at about 19.00 p.m. The IRFS employees went to the office of PIA immediately and saw that the office was indeed surrounded by civil clothed police.
“Civil clothed people detained Shahin Agabeyli while another IRFS employee Ganbar Ganbarov and I were recording the conversation between Agabeyli and one of the civil clothed police,” said I.Abbasov. “Then they twisted our arms and forcefully took our recording equipments. They confiscated the video-camera from Elnur Mammadov, another employee of IRFS, who was recording outside of the building, and took him away in the same car with S.Agabeyli.”
“Milli yol” Newspaper and Poligon Information Agency (PİA.AZ) Editor-in-chief Shahin Agabeyli said that the events that took place yesterday were a show to arrest him. “My deputy, 1988 years old R.Memmedov, who was arrested yesterday at noon is very young and inexperienced,” said Agabeyli. “The employees of the Ministry of Internal Affairs interrogated him and me in the Department to Fight against Organized Crimes regarding the article “There will be professions at the Internal Affairs Ministry” published on PIA website on 5 October. These interrogations were unofficial. They said that this article caused confusion in the society.”
Ş.Ağabəyli noted that he considered this incident a black spot for Azerbaijan’s government.
IRFS Chairman Emin Hüseynov said that they will file a lawsuit against the Ministry of Internal Affairs regarding this issue. “The Ministry of Internal Affairs employees got beyond their duty responsibilities and interfered in the journalists’ work, and deleted the video recordings. The victims and witnesses of the incident have already written a statement and a lawsuit is being prepared. Media Rights Institute will assist with this issue.