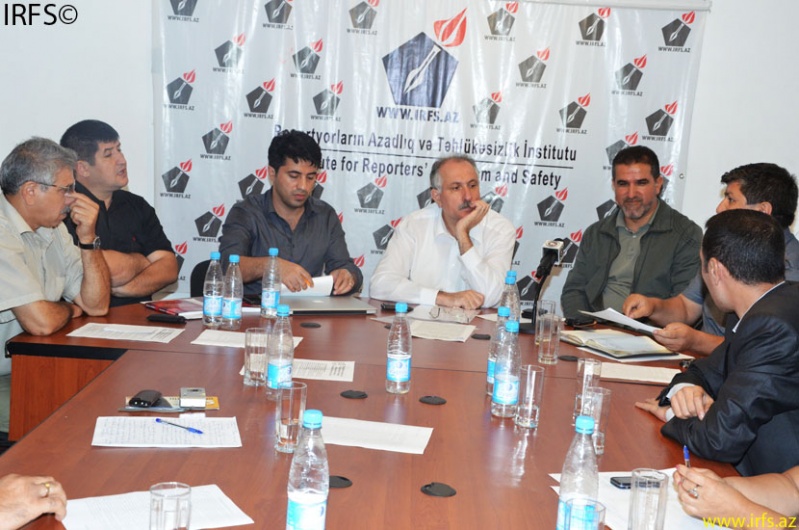 Today, the Institute of Freedom and Safety hosted a meeting of the Union of Editors. The Editors discussed the pre-trial sentence of Khural newspaper reporter Aydin Janiyev, the tax inspections at "Gundam Khabar" newspaper, and the situation of IRFS employee Idrak Abbasov and his family.
After discussions, the editors decided to ask the Media Rights Institute for a lawyer to defend Janiyev’s rights and to send a group to Lankaran to investigate the incident.
Yeni Musavat newspaper founder Rauf Arifoglu said that the newspaper’s lawyer Vagif Huseyn will provide assistance for Janiyev. The Union of Editors also decided to join the 20th September statement released by IRFS.
The Union of Editors will continue to discuss the situation of the Gundam Khabar newspaper, as soon as there is an official response to lawyer Elchin Sadigov’s inquiry to the Anti-Corruption Committee about the Gundam Khabar.
The editors also agreed to monitor and publicize the situation of IRFS employee Idrak Abbasov and the harrassment of his family.
The Union of Editors will again meet at 1pm on September 26th.
Previous Post

JOURNALIST, WHOSE FAMILLY WAS ASSAULTED, IS THREATENED