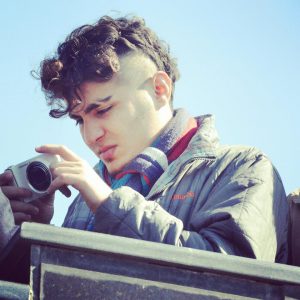 The Institute for Reporters’ Freedom and Safety (IRFS) resolutely condemns the ongoing harassment of a prominent photo-journalist Mehman Huseynov, culminated on October 2 when he was forcibly taken to the law enforcement facilitiesfor the six hour incommunicado interrogation in connection with a remixed video clip, he posted online the previous day, based on the film 300 Spartans, which used quotes from the televised Presidential election debate.

Mehman Huseynov, 24-year old, was unlawfully detained on October 2, at 10 AM by plain-clothed people in front of the IRFS office in downtown Baku. The three men pushed Mehman into a Prado car with a registration plate ‘080’, and took him to Baku city Main Place Department and the Prosecutor General’s Office, where he was unlawfully held incommunicado for six hours. Following his release Huseynov gave an interview stating that police had told him to ‘behave’ and ‘slow down’ his pre-election activities online.

“Mehman Huseynov’s detention was completely unlawful. According to the legislation, if a person is invited to give a statement in connection with a case, he must be sent an official summons which must indicate the case and how he is involved in the case. Given the absence of such a summons, Mehman Huseynov was practically kidnapped. The facts that his arm was twisted during the detention and his statement was taken in the absence of his lawyer are serious legal violations”, comments IRFS Chairman and human rights defender Emin Huseynov.

Today, IRFS reminds President Aliyev of his commitment to promote freedom of the media and Internet freedom. “Azerbaijan has a place in the world of modern technology which is clearly illustrated by the active development of internet journalism,” said President Aliyev, noting that the internet in Azerbaijan is also completely free. “Such repressive and intimidating climate which targets online journalists like Mehman is contrary to the President’s commitment of free Internet. Whena week before an important election, a 24-year old kid is kidnapped and threatened over his online activitythere is no such thing as Internet freedom” IRFS CEO and Chairman Emin Huseynov said.

It is not the first time that Mehman receives threats over his journalism. In the recent months, he has been subject to “brainwashing” by law-enforcement officials, who suggested that Mehman should “collaborate” and “not to go against national interests”.

IRFS reminds that, Mehman is facing up to five years in prison on fabricated ‘hooliganism’ charges. Rights groups strongly believe the charges against him are an attempt to punish him for his creative media outputs that highlight human rights abuses in Azerbaijan. No progress has been observed in the investigation of his trumped-up case since it was launched in June 2012. The fact that the charges against Huseynov still stand means that he faces travel restrictions, and must get permission from the authorities in order to leave the country. On June 17, Huseynov was prevented from traveling to Norway to accept a prestigious Press Prize awarded to him by the FrittOrd Foundation and the ZEIT Foundation.

The journalist Mehman Huseynov exemplifies the fate of those who dare to speak out. The state repression has intensified in the run-up to the polls on October 9 amid authorities’ concern of the anti-government protests and increasing criticism of country’s human rights record, both described as a sedition led by the foreign groups.

As the world’s eyes are on Azerbaijan’s presidential election, the current regime has unleashed a wave of arbitrary detentions, smear campaigns and other sophisticated tactics of repression against politicians, activists and journalists. Recent arrests of journalists Parviz Hashimli and Serdar Alibayli, illegal interference with the private life of politicians and pressure on their families predict that the crackdown will not stop even after the election. IRFS condemns Azerbaijan’s crackdown and urges the regime to release these activists and heed numerous calls for greater respect for its human rights obligations under UN, Council of Europe and other international treaties.

IRFS notes that detention and interrogation of a journalist for expressing his opinionis the violation of the article 46 (freedom of opinion and expression) of the Azerbaijani Constitution and article 10 (freedom of expression) of the European Convention for the Protection of Human Rights and Fundamental Freedoms, and this detention demonstrates how the government does not respect the human rights or fulfill its international obligations.

IRFS reminds that according to the article 6 (right to fair trial) of the European Convention, a detained person must have the following minimum rights: to have adequate time and facilities for the preparation of his defence, to defend himself in person or through legal assistance. The fact that the lawyer was not allowed to be present during the interrogation of the journalist despite of introducing relevant power of attorney is a proof of the government’s disrespect to human rights.

The organization condemns the kidnapping and the incommunicado interrogation of Mehman Huseynov and urges the Azerbaijani government to comply with the local and international legislation.

IRFS urges the Azerbaijani government to end pressure on human rights, specifically the freedom of expression, and immediately and unconditionally release all the arrested and jailed journalists, bloggers and youth activists.

IRFS further calls upon the UN, the Council of Europe and OSCE to make firm and demanding calls on Azerbaijan to fulfill its obligations as a member state, and to take necessary measures once these calls are ignored.