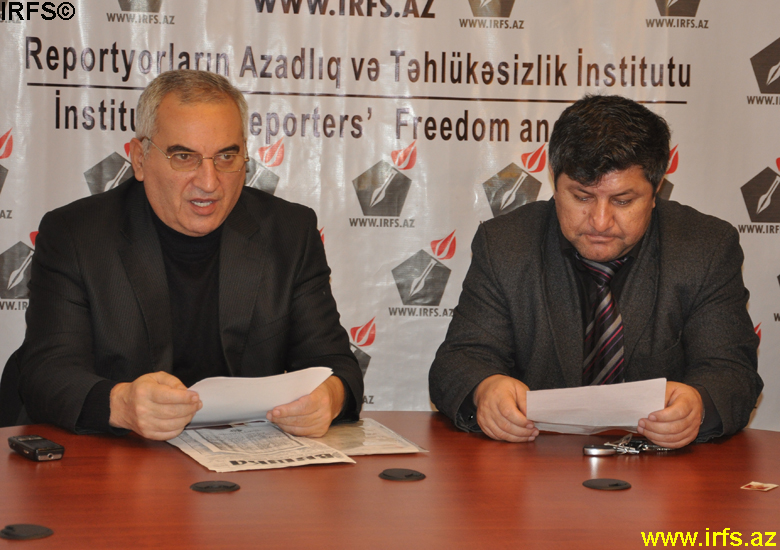 Today, 23 November, in the center of the Institute for Reporters` Freedom and Safety, “Milletim” newspaper’s chief adviser Ramiz Tagiyev held a press conference regarding the arrest of his nephew, newspaper sports writer Akif Safarov.
The press conference included information about pressure that has been put on Safarov and his relatives. Ramiz Tagiyev said that NSM wants to connect Akif Safarov with the case of “Agroyol” Shareholder Society Chairman Eldar Aliyev who allegedly tapped Transport Minister Ziya Mammadov’s office illegally and was imprisoned by the National Security Ministry.

“However, they considered the fact that Akif Safarov is in Turkey and changed the claim,” said Ramiz Tagiyev. “Akif has no connection with this case. There was agreement between Eldar Aliyev and Akif Safarov regarding the land purchase. Eldar Aliyev wrote an application in NSM prison stating that Akif Safarov sold the land to him for an inflated price, but he should have sold it for a cheaper price that would have been fairer. For this Akif Safarov was detained and taken to NSM on 18 November and the Nasimi District Court, and sentenced to three months pre-trial detention on 21 November”.

R.Tagiyey added that this case is connected with his work and that pressure against Milletim newspaper was restricted to this.

Tagiyev noted that “Milletim” newspaper editor-in-chief, imprisoned Faramaz Novruzoglu was sentenced to three months of imprisonment. “I was also sentenced to six months corrective labor under the same verdict. My son-in-law, Milletim newspaper founder Ilkin Agali was threatened with a weapon by unidentified people recently and blamed the newspaper for working with Kurds and various officials.

Tagiyev said that he and the newspaper employees are stalked every day and that he appealed to the Procurator General, the Interior Affairs Ministry, and the National Security Ministry regarding this.