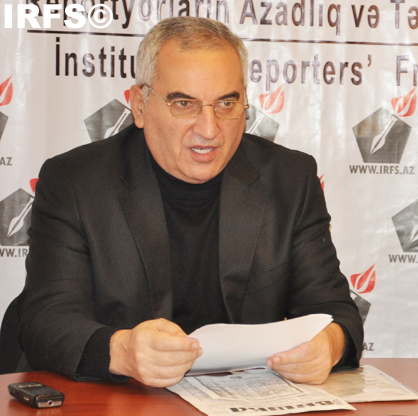 Milletim newspaper’s chief advisor Ramiz Tagiyev appealed to the Institute for Reporters’ Freedom and Safety regarding the persecution he and other employees face.
He claims that he himself, Milletim newspaper deputy editor-in-chief Lale Agayeva, and founder of the newspaper Ilkin Agayev have been prosecuted by the Azerbaijan National Security Ministry’s Anti Terror Centre regularly. It is said in the appeal that they are aware of people stalking them regularly, and they are followed by the yellow colored car “TOFAS” “Taxi” sign on it, cars “TOFAS” which have state number sign beginning with 10 and ending with 271, and aluminum colored, state number sign beginning with 10 and ending 829. R.Tagiyev said that on 5 November, in the evening, at about 11.30 p.m., Lale and Ilkin Agayev were stopped and threatened with gun. Lale and Ilkin do not have any doubt that those persons were the employees of special service organs. Ramiz Tagiyev claims that on 19 November, his nephew Akif Seferov was arrested at the order of the National Security Ministry, due to his professional activity. Now Seferov is being kept in the investigative prison. In the appeal Tagiyev added that “Milletim” newspaper’s editor-in-chief Feremez Allaverdiyev was arrested at the order of the National Security Ministry’ s Anti terror Centre and expressed concern that the Ministry is working hard to involve him in the same criminal case.
IRFS appealed to National Security Minister Eldar Mahmudov, Internal Affairs Minister Ramil Usubov and Procurator General Zakir Garalov to investigate the issue.
Milletim newspaper began to operate at the beginning of this year and is published once a week.
On 8 October 2009, Milletim newspaper’s editor-in-chief Feremez Novruzoglu, who worked in “Nota” newspaper, was sentenced to three months imprisonment on the special lawsuit of “Azadlig Harakatchilari” Union Chairman Tahmasib Novruzov and Ramiz Tagiyev was sentenced to six months corrective labor.
Previous Post

NUMBER OF PEOPLE WHO FACE TORTURE INCREASED IN AZERBAIJAN