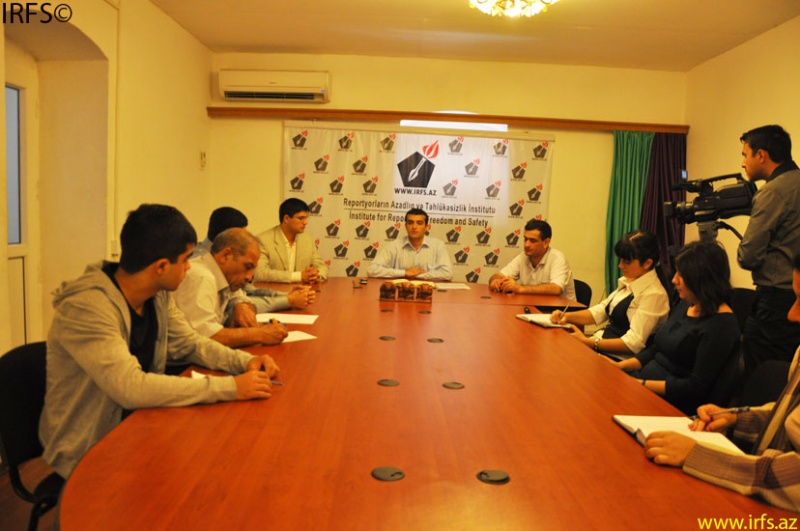 On 16th of September, in the press center of the Institute for Reporters` Freedom and Safety, the Initiative Group on the Rights of Prisoners for Early Release conducted a press conference.
Group Coordinator Rasul Jafarov said that they began implementation of a project costing 5,000 USD on the aforementioned issue.
The first stage of the project involved education of prisoners. The Initiative Group appealed to the Penitentiary Service of the Justice Ministry to hold trainings for the prisoners. However, their appeal was rejected.
The Ministry did not respond to the Group’s information inquiry for the number of the early released prisoners. The Penitentiary Service said that Ministry had held trainings for the prisoners. Also, a public committee consisting of public representatives contacted with prisoners in the prison, so the Group wasn’t allowed to contact the prisoners. Citing this response by the Penitentiary Service, the Group requested assistance from the public committee.
As for the inquiry to the number of early released prisoners, the penitentiary service refused to respond, claiming the information was a state secret. The group representatives assessed both cases as a restriction of the right to obtain information. They filed  a lawsuit to Yasamal District Court against on the grounds of the rejection to repond to the inquiry.
However, the group has declared that it didn’t stop operating, and a hot line will be available for the prisoners’ relatives. The group will conduct a training for the relatives of prisoners, who are interested in freeing their relatives in prison. With the relatives support, the Group can lead the case to the European Court of Human Rights. Besides, if the relatives of prisoners launch court proceedings, the lawyers of the Group will provide them with legal assistance.
The project “Social initiatives to ensure the rights of prisoners for early release”, financed by International Bridges to Justice, is carrying out these activities.