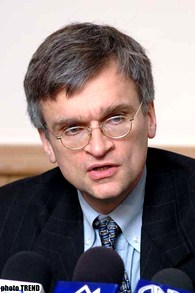 (Exclusive interview with Peter Semneby, the European Union’s special representative in South Caucasus)
Question: On October 12th, the leaders of the APFP-Musavat opposition party made a statement condemning the Central Election Commission (CEC) for their multiple rejections of the party’s candidate registration for parliamentary elections.

The party says that the CEC is basing its refusals on false information. Other opposition parties and independent candidates have had similar experiences. What will be the consequences for these actions, and what can international organizations do to prevent this from happening?
Answer: If this is the case, it would be worrying news. It should be noted, however, that the registration process is not yet over. I am therefore hopeful that there is still time to resolve disagreements.  I had in-depth discussions with the authorities during my last two working visits to Baku, and I received a positive impression after learning that the Central Election Commission was well prepared and ready to organize free and fair elections in line with international standards. Some of the lessons learned in previous elections have been taken into account. Now these good intentions must be implemented. International organizations, including the EU, are following the situation closely. The OSCE/ODIHR election observation mission will provide a detailed report after the elections. As in previous years, these observations and reports will serve as the basis for our future dialogue with Azerbaijan in the field of elections. This issue is included in our Association Agreement negotiations. It is important to note that work on electoral practices will continue after November 7 (2010 election date).
Question: The refusal to register opposition candidates has been linked to attempts to restrict their access to free airtime. How could this influence the quality of the elections?
Answer: That candidates running for Parliament have access to the media, and that citizens have access to information regarding these candidates are both key components of a free and fair election. I have raised the possibility of increasing free airtime on radio and TV, and have encouraged private TV stations to play a more active and responsible role in providing their own airtime for the elections. It is true that much more can be achieved today through modern communications such as the internet, but ultimately, it is still the role of the government to ensure that the electorate has access to all the relevant information. The final turnout in these elections will reveal whether the current government has achieved this.
Question: Bloc APFP-Musavat has planned an election rally on October 17th, but it has not yet been authorized. During your visit to Azerbaijan you raised the issue of freedom of assembly with the officials. What was their reaction?
Answer: The relevant authorities have expressed a commitment to finding a solution to this issue. We support OSCE efforts to address the issue together with the authorities. The recent Congress of APFP was a good sign, and I am hopeful that the October 17th event will mark the next step.
Question: The official election campaign starts on October 15th, but the opposition is already threatening to boycott the elections if the authorities will continue to violate other electoral regulations. If that happens, what will the EU’s response be?
Answer: While I can understand that there are certain challenges in all pre-election environments, I would still like to encourage all candidates to participate in the election and continue campaigning. The rules and regulations have been changed and improved within the last years; it is now time to ensure their implementation. I very much hope that the opposition will participate in the election, and that the voters will turn out on Election Day.
Previous Post

JOURNALIST UNABLE TO GET A PASSPORT